Items related to High Season: How One French Riviera Town Has Seduced... 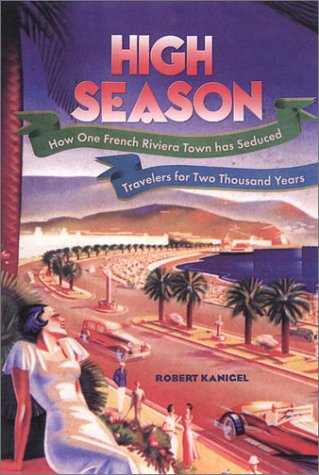 A traveler's history of Nice traces its foundation by seafaring Greeks, colonization by Romans, and transformation by English aristocrats before becoming a tourist hot spot, profiling the contributors to its popularity as well as its most famous locales. 15,000 first printing.

Robert Kanigel is the author of The One Best Way, Apprentice to Genius, and The Man Who Knew Infinity, which was a finalist for the National Book Critics Circle Award and the Los Angeles Times Book Prize. His articles and essays have appeared in The New York Times Magazine, Civilization, and Wilson Quarterly, among other publications. He teaches writing at the Massachusetts Institute of Technology.

Kanigel (The One Best Way; Apprentice to Genius) has mined two centuries of memories (through diaries, photographs, snippets of letters and snapshots of love affairs) from the collections of everyone from American G.I.s and Russian queens united only in their choice of holiday destination to write a book about the enduring and ever-changing charm of the Riviera's first city, Nice. Not that the Nice of today, beloved of British package holiday makers and inveterate gamblers, is the same Nice once favored for its healthful air and curative atmosphere by European royalty. This is not a Polaroid of a place fixed in time, but at once a sepia photograph, a black and white print and a digital image of a succession of adaptable cities. Kanigel traces the impact of the evolution of science, revolution, transport and world wars on this city. Airports, socialist governments and peace treaties come under the same microscope as fashionable tans and the influence of Brigitte Bardot. He links his subjects with consummate skill, supporting social theories with diary excerpts and contemporary news reports to produce an ardently researched, enlightening report on a city that becomes, through the course of this study, a marker for change, an indicator of social mores and fashions and a case study for the rise of tourism as an industry and an art form. Illus.
Copyright 2002 Cahners Business Information, Inc.

HIGH SEASON: HOW ONE FRENCH RIVI