Items related to Code of Honor 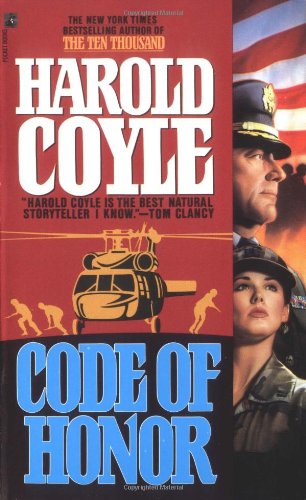 Harold Coyle, New York Times bestselling author of Against All Enemies, Trial by Fire, and Bright Star, is America's acclaimed master of the war novel. In Code Of Honor, Coyle delivers battlefield realism and excitement in a story that echoes the complex U.S. military mission in today's world....

A corrupt and fractured government in Bogotá, Colombia, requests a small expeditionary force of U.S. troops to combat drug lords and a growing insurgency. It's a scenario for disaster: an unstable country...an elusive enemy...a political and military minefield. The 11th Air Assault Division is called on to act as a police force, even when Brigadier General Scott Dixon reports back from a fact-finding mission that it's a war America can't win. But for a paper-pushing U.S. Major General in Bogotá, no initiative is too risky to safeguard his career. Then Captain Nancy Kozak -- under assault in the field, but determined to avert defeat and protect the soldiers in her command -- dares to defy him. With careers hanging in the balance, Kozak is struggling to survive an explosive clash that pits resolve against prejudice, and honor against ambition....

Harold Coyle is the New York Times bestselling author of nine novels, including Look Away, The Ten Thousand, Trial by Fire, Bright Star, Sword Point, and Team Yankee. He lives in Leavenworth, Kansas.

A master of conjectural conflict, Coyle (The Ten Thousand, Trial by Fire, etc.) here musters his durable troupe of GIs in Colombia, where a corrupt, shaky government has requested US aid in its intensifying struggle with drug lords and a suddenly rejuvenated band of leftist rebels. Though dispatched as peacekeepers, the American units (whose ranks encompass several characters, including Captain Nancy Kozak, from the author's earlier works) soon find themselves engaged in deadly battles against aggressive, well-equipped guerrillas. The ambiguous mission of the muddy-boots soldiers is not made any easier by their divisional commander, Major General G.B. Lane, a rear-echelon martinet who disregards field intelligence when it suits his careerist purposes. Disturbed by what's shaping up as a Vietnam-like quagmire, the Army's Chief of Staff assigns straightshooting Scott Dixon, a newly minted brigadier, to be his eyes and ears in the war-torn republic. Also on the scene is Jan Fields, Dixon's loyal wife and, by providential happenstance, chief of World News Network's Bogota bureau. The plucky WNN correspondent's enterprising inquiries into an abortive air assault operation that Lane has covered up help precipitate outcomes ranging from her own expulsion through relief of the pusillanimous Lane, who has vindictively threatened to court-martial Kozak despite the bravery and effective leadership she has shown under fire. Dixon (who has saved Washington's bacon in previous Coyle thrillers) eventually takes charge of the expeditional force, which has to fight its way out of Colombia as insurgents topple the incumbent regime. Back in the Pentagon, the old soldier ruefully counts the high cost of geopolitical adventurism for those at the sharp end of the bayonet. Authentic accounts of high-tech combat action on alien fields in the context of an all too plausible foreign-relations/military snafu, plus credible portrayals of women at arms. Another winner for Coyle and his ongoing cast of heroines as well as heroes. -- Copyright ©1994, Kirkus Associates, LP. All rights reserved.

Book Description Condition: New. Quality Books. Because We Care - Shipped from Canada. Usually ships within 1-2 business days. If you buy this book from us, we will donate a book to a local school. We donate 10,000+ books to local schools every year. If there are any problems, pleases ask us to resolve it amicably before leaving any feedback. Seller Inventory # R21806S