Items related to Fade the Heat 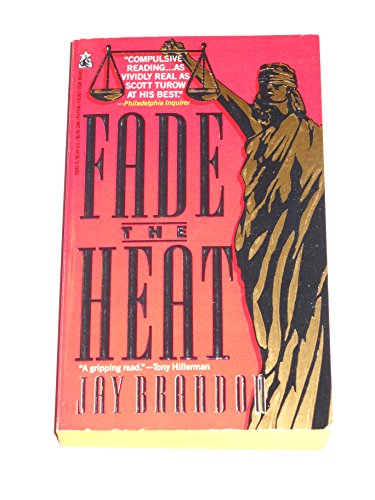 In a case that shocks San Antonio, newly elected DA Mark Blackwell's son is accused of raping a cleaning woman. As Blackwell searches for clues, he realizes that he is the real target for faceless enemies whose motives he cannot even begin to fathom. Optioned by Steven Spielberg's Amblin' Productions. HC: Pocket.

Mark Blackwell has been district attorney of a Texas city for only a few months, but already a crisis threatens to ruin his career. His son has been framed for a vicious rape, and the prosecutor's office must decide how to proceed. The cynical district attorney must use his political connections and everything he knows about exploiting the system in order to exonerate his son--even if he is actually guilty. Brandon's fourth novel (after Predator's Waltz ) will inevitably be compared to Presumed Innocent ; in fact, the similarities are striking. But although attorney Brandon worked as a Texas prosecutor, he never quite manages to bring backstage political machinations alive, and his protagonist too often explains the legal system rather than living it. The book is bogged down by internal monologues and stiff dialogue; some of the subplots, like Blackwell's relationship with his brilliant assistant, lead nowhere. But in this genre, the plot's the thing, and here the corruption-tinged story makes up for the other faults. Surprising twists and heart-in-the-mouth trial scenes will satisfy lovers of crime and courtroom thrillers. Major ad/promo; movie rights to Amblin Entertainment.
Copyright 1990 Reed Business Information, Inc.

David Blackwell, son of the district attorney of San Antonio, Texas, stands before a jury of his peers accused of rape. He claims his accuser staged the rape; ripped off her own clothes, clawed her own flesh. It is an implausible story, one his own defense attorney doubts. While the ensuing courtroom drama is fascinating, it is secondary to Brandon's chilling exposure of all those sworn to uphold the impartiality of justice. Theirs is a corrupt facade: career advancement, politics, personal agendas, and vendettas leave David a victim of the miscarriage of justice. Brandon's skill in tearing away this second layer of the legal justice system is credible, as he is himself a practicing attorney. An unsettling view for readers of courtroom drama. Film rights have been optioned by Steven Spielberg. Recommended. Previewed in Prepub Alert, LJ 4/1/90.
- M . J . Hethcoat, San Francisco
Copyright 1990 Reed Business Information, Inc.