Items related to The First Crusade: The Call from the East

Frankopan, Peter The First Crusade: The Call from the East

The First Crusade: The Call from the East 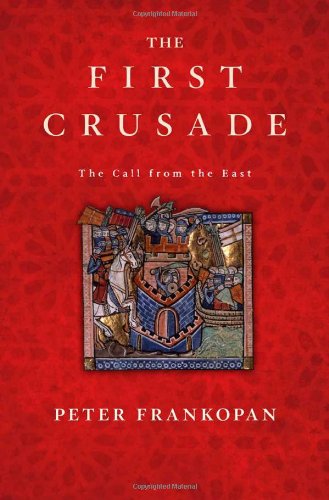 According to tradition, the First Crusade began at the instigation of Pope Urban II and culminated in July 1099, when thousands of western European knights liberated Jerusalem from the rising menace of Islam. But what if the First Crusade’s real catalyst lay far to the east of Rome? In this groundbreaking book, countering nearly a millennium of scholarship, Peter Frankopan reveals the untold history of the First Crusade.

Nearly all historians of the First Crusade focus on the papacy and its willing warriors in the West, along with innumerable popular tales of bravery, tragedy, and resilience. In sharp contrast, Frankopan examines events from the East, in particular from Constantinople, seat of the Christian Byzantine Empire. The result is revelatory. The true instigator of the First Crusade, we see, was the Emperor Alexios I Komnenos, who in 1095, with his realm under siege from the Turks and on the point of collapse, begged the pope for military support.

Basing his account on long-ignored eastern sources, Frankopan also gives a provocative and highly original explanation of the world-changing events that followed the First Crusade. The Vatican’s victory cemented papal power, while Constantinople, the heart of the still-vital Byzantine Empire, never recovered. As a result, both Alexios and Byzantium were consigned to the margins of history. From Frankopan’s revolutionary work, we gain a more faithful understanding of the way the taking of Jerusalem set the stage for western Europe’s dominance up to the present day and shaped the modern world.

Peter Frankopan is Director of the Center for Byzantine Research at the University of Oxford.

In this fluent and dramatic account, Peter Frankopan rightly places the Emperor Alexios at the heart of the First Crusade and in doing so skillfully adds a dimension frequently missing from our understanding of this seminal event. Frankopan illuminates the complex challenges that faced Alexios and deftly depicts the boldness and finesse needed to survive in the dangerous world of medieval Byzantium. (Jonathan Phillips, author of Holy Warriors: A Modern History of the Crusades)

Peter Frankopan's reassessment of the Byzantine contribution to the origins and course of the First Crusade offers a compelling and challenging balance to traditional accounts. Based on fresh interpretations of primary sources, lucidly written and forcefully argued, The First Crusade: The Call from the East will demand attention from scholars while providing an enjoyable and accessible narrative for the general reader. (Christopher Tyerman, author of God's War: A New History of the Crusades)

Filled with Byzantine intrigue in every sense, this book is important, compellingly revisionist and impressive in its scholarly use of totally fresh sources. It refocuses the familiar western story through the eyes of the emperor of the east and fills in the missing piece of the puzzle of the Crusades. (Simon Sebag Montefiore, author of Jerusalem: The Biography)

In a field near Clermont, France, on November 27, 1095, Pope Urban II issued a rousing call to arms, a march to Jerusalem to retake the Holy City from the infidel Muslims who for more than 20 years had been invading and conquering lands belonging to Christians. Four years later, European armies arrived in Jerusalem and drove out the Muslims, retaking the city for Christendom. Yet, as historian Frankopan, a fellow at Oxford, so forcefully reminds us in this cracking good story of political and religious intrigue, the real reason that Urban II rallied the forces that day was an urgent message from Alexios I Komnenos, emperor of Byzantium, whose political authority had begun to decline and whose empire was under attack on all sides by Muslim forces. Alexios called upon Urban, who sent troops immediately. Frankopan draws deeply upon the Alexiad, written several decades later by Komnenos's daughter, Anna, and he presents a vivid portrait of a man whose early political ineptness created division in his empire, but whose boldness launched the Crusades and changed the shape of the medieval world by expanding the geographic, cultural, and political horizons of Europe. (Publishers Weekly 2012-02-06)

In his project to give fuller credit to those Byzantine and Turkish leaders who actually caused the First Crusade, Frankopan proves refreshingly undaunted by the prospect of scaling the citadel of almost a thousand years of scholarship. He is like the Byzantine warrior he describes who invented an ingenious flying bomb, "coating young birds with pine resin mixed with wax and sulphur before setting fire to them and despatching them back to their nests inside the walls of the city he was besieging." Scholarly and yet accessible, and unapologetically partisan, The First Crusade, as any vibrant history should, is bound to set a lot of feathers flying...All in all, The First Crusade is a persuasive and bracing work. Peter Frankopan is not yet well known, but he deserves to be. One trusts him to go on ploughing his own furrow and not join the brat-pack of historians. (Nicholas Shakespeare The Telegraph 2012-02-06)

The Crusades have been at the center of Western thought for 1,000 years, and have been the subject of too many books to count: For Crusades buffs, it sometimes feels like there is nothing new under the sun, and for beginners, it can be difficult to know where to start. Oxford historian Peter Frankopan has crafted a narrative and an argument that will appeal to both groups. In the popular imagination, the First Crusade begins with Pope Urban II's stirring speech at the Council of Clermont in 1095. Frankopan reminds us there is another side to the story. The idea for the crusade, he writes, originated in the East, in a desperate yet strategic plea to the West issued by Byzantine emperor Alexios I Komnenos, whose bold but misguided policies had placed his empire in grave danger. Much of the book is devoted to this often-overlooked Byzantine context, and it makes for a welcome rectification and lively reading. Frankopan's most interesting contribution is the idea that Alexios "knew how to appeal to Westerners," and created the Jerusalem objective as a selling point. (Benjamin Soloway The Daily 2012-04-08)

Frankopan's reassessment of the first crusade through the prism of Byzantium is a useful corrective to the mass of western-centric crusade history...This book offers an accessible and convincing account of the crusade, which was both concocted and executed under the long shadow of Byzantium. (Josh Glancy Sunday Times 2012-02-26)

Frankopan [writes] with tremendous literary verve...[The] cry to free Jerusalem has never been better expressed...Frankopan's creative revisionism pierces the armor of medieval history with a new weapon: the call of the East. (Colin Gardiner Oxford Times 2012-03-13)

1. The First Crusade: The Call from the East

2. The First Crusade: The Call from the East

3. The First Crusade: The Call from the East