Items related to Choice and Consequence 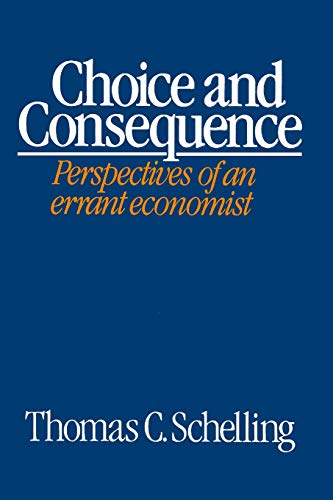 Thomas Schelling is a political economist “conspicuous for wandering”―an errant economist. In Choice and Consequence, he ventures into the area where rationality is ambiguous in order to look at the tricks people use to try to quit smoking or lose weight. He explores topics as awesome as nuclear terrorism, as sordid as blackmail, as ineffable as daydreaming, as intimidating as euthanasia. He examines ethical issues wrapped up in economics, unwrapping the economics to disclose ethical issues that are misplaced or misidentified.

With an ingenious, often startling approach, Schelling brings new perspectives to problems ranging from drug abuse, abortion, and the value people put on their lives to organized crime, airplane hijacking, and automobile safety. One chapter is a clear and elegant exposition of game theory as a framework for analyzing social problems. Another plays with the hypothesis that our minds are not only our problem-solving equipment but also the organ in which much of our consumption takes place.

What binds together the different subjects is the author’s belief in the possibility of simultaneously being humane and analytical, of dealing with both the momentous and the familiar. Choice and Consequence was written for the curious, the puzzled, the worried, and all those who appreciate intellectual adventure.

Thomas C. Schelling was Distinguished University Professor in the Department of Economics and School of Public Affairs at the University of Maryland and Lucius N. Littauer Professor of Political Economy, Emeritus, at Harvard University. He was co-recipient of the 2005 Nobel Prize in Economics.

“Whether one is looking for evidence and insights on the rationality or the irrationality of man, Choice and Consequence is one of the very best places to look... Mr. Schelling’s book is a superb place to get a sense of both the need for and the dangers of the assumption of rationality.”―New York Times

“Without exception, the essays are witty, erudite and stimulating.”―Wall Street Journal

“What makes Schelling such a pleasure to read, apart from his lean, clear, wry conversational style, is the shrewdness and human insight with which he breaks down complex problems and phenomena into their parts, permitting systematic understanding to develop.”―The New Republic

5. Choice and Consequence (Paperback or Softback)

Book Description 1986. Condition: NEW. 9780674127715 This listing is a new book, a title currently in-print which we order directly and immediately from the publisher. For all enquiries, please contact Herb Tandree Philosophy Books directly - customer service is our primary goal. Seller Inventory # HTANDREE01464164