Items related to Downfall: The End of the Imperial Japanese Empire

Frank, Richard Downfall: The End of the Imperial Japanese Empire

Downfall: The End of the Imperial Japanese Empire 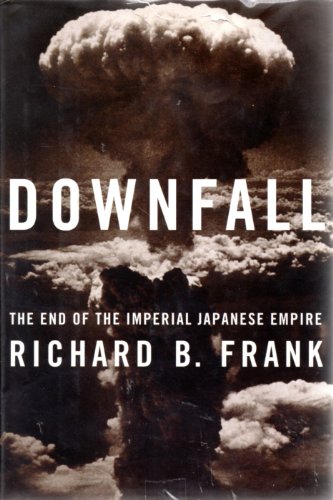 "The publication of Richard Frank's long-awaited Downfall is an event of great importance, not only to historians but to the general public. No aspect of World War II is more controversial today than the use of atomic bombs against Japan in 1945. Some have argued that this act was cruel and unnecessary since Japan was on the verge of surrender. But by means of exhaustive      research and the employment of previously neglected and recently declassified sources, Frank proves in this definitive book that neither the Emperor nor the Japa-nese armed forces were anywhere close to surrendering in August 1945.

"In a stunning tour de force, Frank re-creates the end of the war, not as it seemed to people writing much later but as it appeared to American and Japanese decision makers at the time. Though the bomb was often seen as the worst possible means of ending the Pacific war, Frank establishes that its use was superior to all existing alternatives, and saved not only Allied lives but Japa-nese lives as well. Masterly in conception, brilliantly    reasoned, superbly researched, Downfall is all but impossible to put down.

"Anyone concerned with the moral, military, and political issues surrounding the end of the Pacific war must read this book."
--William L. O'Neill, author of A Democracy at War

Downfall opens with a vivid portrayal of the catastrophic fire raid on Tokyo in March 1945--which was to be followed by the utter destruction of almost every major Japanese city--and ends with the anguished vigil of American and Japanese leaders waiting to learn if Japan's armed forces would obey the Emperor's order to surrender.

America's use of the atom bomb has generated more heated controversy than any other event of the whole war:

Did nuclear weapons save the lives of hundreds of thousands of Americans poised to invade Japan?
Did U.S. leaders know that Japan was urgently seeking peace and needed only assurance about the Emperor's safety to end the war swiftly?
Was the bomb really used to intimidate the Russians?
Why wasn't the devastating power of the weapon demonstrated first before being unleashed on a city?

Richard B. Frank has brought to life these critical times, working from primary documents, reports, diaries, and newly declassified records. These pages present the untold story of how American leaders learned in the summer of 1945 that their compromise strategy to end the war by blockade and bombardment, followed by invasion, had been shattered; radio intelligence had unmasked a massive Japanese buildup on Kyushu designed to turn the initial invasion into a bloody shambles. Meanwhile, the text and analysis of diplomatic intercepts depicted sterile prospects for negotiation before a final clash of arms. Here also, for the first time, is a full and balanced account of how Japan's leaders risked annihilation by gambling on a military strategy aimed at securing political bargaining leverage to preserve the old order in Japan.

Downfall replaces the myths that now surround the end of the war and the use of the bomb with the stark realities of this great historical controversy.

Downfall: The End of the Imperial Japanese Empire is an impeccably written analysis of the last months of the Pacific War and the unfolding of the American air campaign over Japan. The story opens with a searing description of the fire-bombing of Tokyo in March 1945, which caused more deaths than the atom bomb in Hiroshima. Within five months, Japan's economy was collapsing and the country faced catastrophic starvation. Richard B. Frank coolly analyzes different scenarios for ending the war (Russia waited in the wings). Frank concludes that the emperor and the Japanese military were far from ready to surrender, and that the decision to use the atom bomb probably saved millions of lives, not only Allied but Japanese and other Asian lives, also--perhaps a hundred thousand Chinese were dying each month under Japanese occupation. The effects of the bomb worked on many levels, even lending faces to the Japanese militarists, who could convince themselves that they were defeated not by a lack of spiritual power but by superior science. Densely documented, intelligently argued, Downfall recreates the end of the war from the viewpoints of the principals, giving the book an unusual immediacy. A highly valuable insight into the disintegration of the Japanese Empire, one of the most dramatic episodes of World War II. --John Stevenson

"Brilliant . . . an enormous work based on the most meticulous research. Here is everything you might want to know about Guadalcanal."

"Richard Frank has produced what will surely become the standard history of the U.S. Navy's most important campaign. . . . A stunning debut by a major new talent in American letters."
--Tom Clancy

"Guadalcanal is a masterly account of what happened and why. . . . Books of this quality are rare, and Richard B. Frank should be commended for his authoritative inaugural work."

"Mr. Frank's book is impressive in virtually all respects--a vividly and carefully crafted monument that is worthy of the Americans and Japanese who collided . . . on a little-known island named Guadalcanal."
--The New York Times Book Review

1. Downfall: The End of the Imperial Japanese Empire

2. Downfall: The End of the Imperial Japanese Empire

3. Downfall: The End of the Imperial Japanese Empire

4. Downfall: The End of the Imperial Japanese Empire Frank, Richard

5. Downfall: The End of the Imperial Japanese Empire

6. Downfall: The End of the Imperial Japanese Empire Frank, Richard