Items related to WHO IS MY NEIGHBOR? (Umbrella Book)

Grejniec, Michael WHO IS MY NEIGHBOR? (Umbrella Book)

WHO IS MY NEIGHBOR? (Umbrella Book) 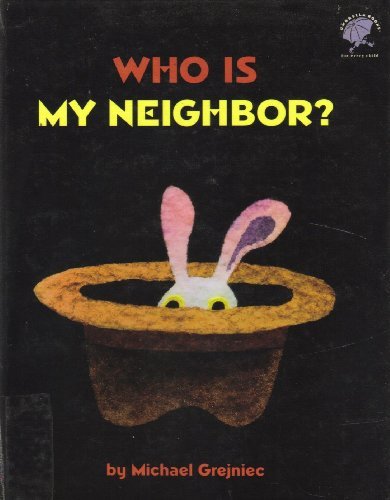 A boy's dreary world is transformed when he meets his unusual neighbor in this picture-book fantasy. Young Phil describes life on the edge of town, where the sky is always cloudy and the streets are always gray. He can't help being curious about the mysterious man in the apartment upstairs. Phil watches him leave the building in the morning and return in the evening, but he never sees the man's face. One day the electricity fails, and Phil's mother sends him to borrow candles from the shadowy man. Inside the strange apartment, Phil is treated to a mind-bending magic-trick/circus extravaganza. Grejniec's (Good Morning, Good Night; What Do You Like?) short sentences and matter-of-fact tone aptly mimic a child's storytelling style. However, Phil's adventure flags because of the text's mixture of moods. An imaginative flight of fancy on one level, the story also contains some potentially disturbing undercurrents (e.g., encountering strangers alone in the dark). A happy ending helps resolve these issues, although it is difficult to distinguish between real and make-believe here. Grejniec's richly textured watercolors have the look of a mixed-media collage, and his dense, energetic colors pop right off the black-and-white backgrounds. The menagerie of lions, rabbits and spotted horses vaulting through the blackness is especially eye-catching. Ages 3-7.
Copyright 1994 Reed Business Information, Inc.

PreSchool-Grade 1-Phil's neighborhood is pretty gray, and no one else lives in his apartment building except for the mysterious Mr. Hart. Each day the boy watches from his window as the man leaves in the morning and returns at night wearing a hat that covers his face. One night, the electricity goes out and Phil's mother sends him upstairs to borrow some candles. Gathering his courage, he bravely trudges up the dark stairs and meets the intriguing Mr. Hart, who, it turns out, is a magician. Then the fun begins. From his seemingly empty hat, Mr. Hart pulls brightly colored balls, rabbits, and even a black-and-white horse. Lastly, he takes out a twinkling star and gives it to Phil, providing light to see by and to brighten up his dull days. Grejniec's distinctive watercolors are done on textured paper and boast bold, black backgrounds and colorful, simplified objects. Phil's hair and the horse's spots blend into the blackness of Mr. Hart's apartment, producing an interesting effect that tricks the eye. A pleasing, well-crafted title that will delight youngsters.
Dot Minzer, North Barrington School, Barrington, IL
Copyright 1994 Reed Business Information, Inc.

1. WHO IS MY NEIGHBOR? (Umbrella Book)

2. WHO IS MY NEIGHBOR? (Umbrella Book) [Hardcover] Grejniec, Michael

3. WHO IS MY NEIGHBOR? (Umbrella Book) [Hardcover] Grejniec, Michael