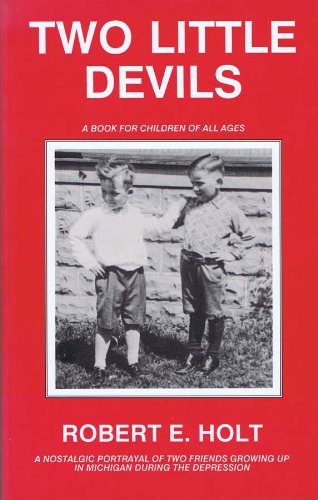 "See you at Thanksgiving and Christmas, Little Bob." "Okay, Big Bob, take care of yourself." This was the simple bond of friendship between Little Bob Holt and Big Bob Bauer, each trusting the other to provide the spirit with which to get through the difficult times of the Depression. In this bittersweet recollection of childhood, Robert E. Holt presents us with the sometimes serious, sometimes hilarious experiences of two boys growing up in the Midwest at that time. They shared both town and country escapades, Big Bob living in Grand Rapids, Michigan and Little Bob on a ten-acre farm. ln the city, they caused an elephant to run amok on circus grounds, secretly rode a boxcar, and dug a wonderful hideaway under Big Bob's porch where their imaginations turned them into dashing heroes. On the farm, they splashed in an old swimming hole, had egg fights in a barn, stole melons from someone else's vine, and overturned neighboring farmers' privies. Besides recapturing his zestful youth, Bob Holt paints some picturesque scenes of regional life-Michigan winters of up to six feet of snow, making maple syrup, stacking straw, planting pine seedlings to grow into a forest of spiritual beauty-and all at once we, too, are wishing to be back there with him. "TWO Little Devils is a very warm book and did indeed bring back memories of those great days that were, perhaps, more beautiful in Robert Holt's mind because they dealt with the outdoors, etc., while I grew up in a little old town called Ontario!" LORNE GREENE "l found TWO Little Devils delightful. I relived some of those pages with Bob Holt because I grew up as the only girl with ten brothers, and they used to pull some of those same stunts." PATSY MONTANA

Book Description Hardcover. Condition: Good. Item is in good condition. Some moderate creases and wear. This item may not come with CDs or additional parts including access codes for textbooks. Might be an ex-library copy and contain writing/highlighting. Seller Inventory # DS-0682493627-3