Items related to The Complete Short Stories of Ernest Hemingway, The... 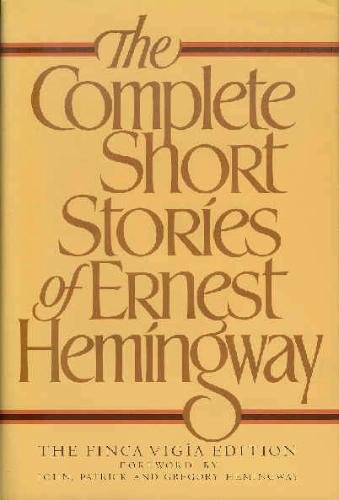 Born in Oak Park, Illinois, in 1899, Ernest Hemingway served in the Red Cross during World War I as an ambulance driver and was severely wounded in Italy. He moved to Paris in 1921, devoted himself to writing fiction, and soon became part of the expatriate community, along with Gertrude Stein, F. Scott Fitzgerald, Ezra Pound, and Ford Madox Ford. He revolutionized American writing with his short, declarative sentences and terse prose. He was awarded the Nobel Prize for Literature in 1954, and his classic novella The Old Man and the Sea won the Pulitzer Prize in 1953. Known for his larger-than-life personality and his passions for bullfighting, fishing, and big-game hunting, he died in Ketchum, Idaho, on July 2, 1961.

THE COMPLETE SHORT STORIES OF ER