Items related to Onward!: 25 Years of Advice, Exhortation, and Inspiration... 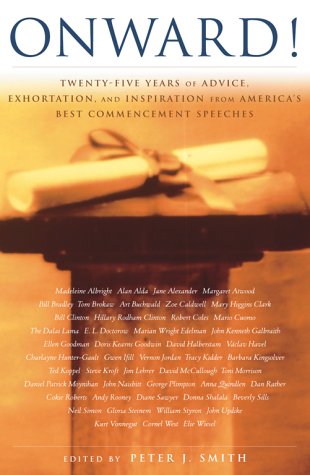 In this beguiling anthology of more than 200 excerpts from the best commencement addresses given during the last twenty-five years, editor Peter J. Smith proves that, in the right hands, the graduation speech is thriving. Far from being a tired truism, the commencement address can be a thoughtful, heartfelt epistle, a dispatch from the front lines of adulthood to the fresh recruits of the newly graduated. In Onward! Twenty-Five Years of Advice, Exhortation, and Inspiration from America's Best Commencement Speeches, Smith has culled what the best minds (and hearts) have imparted to college graduates and in the process has created both a remarkable social history and a stirring celebration of the human spirit. Arranged by year (and introduced with a recap of each year's cultural trends and events), the excerpts in Onward! spring from people with a wide array of talent, experience, and perspective: presidents and novelists, actors and news anchors, scientists and comedians. Their wisdom -- much of it surprising, all of it compelling -- will inform, delight, and inspire. "We live in an age in which men have walked on the moon, have harnessed the vast power of nuclear energy, and have created enormous material wealth and riches. Yet our age is marked by ethical retardation, and by the passive tolerance of racism and poverty."-- VERNON JORDAN, 1976 "I want to discourage you from choosing anything or making any decision simply because it is safe. Things of value seldom are." -- TONI MORRISON, 1979 "The best thing you can give yourselves for graduation is the gift of possibility. And the best thing you can give each other is the pledge to go on protecting that gift in each other as long as you live."-- PAUL NEWMAN, 1990 "Do not let people make you cynical. And do not think for a minute that you can have a good, full life if you don't care about what happens to the other people who share this nation and this planet with you."-- BILL CLINTON, 1995 "In all things in life, choose your conscience, and trust your instincts and lead your lives without regrets. It is simply easier that way." -- DAVID HALBERSTAM, 1996 Full of equal measures of common sense and goodwill, Onward! is the ideal companion with which to begin one's journey

The last, and potentially most meaningful, bit of education your college throws your way comes at the very moment you're least likely to hear and comprehend it, let alone contemplate and cogitate on it. No, it's not in that 8 a.m. lecture class or evening seminar, but out among your fellow graduates on commencement day. There you are, resplendent in your cap and gown, ostensibly listening to someone famous and wise, but more likely awash in the exhilarations, fears, and hangovers of graduation. When you stride proudly into the sunset with your diploma, it's unlikely that you'll carry with you any of that carefully honed commencement address.

And that's a shame. Commencement speeches, historically, contain more nuggets of wisdom and insight than most spoken words you're likely to have heard or likely to hear. So we owe Peter J. Smith a considerable amount of gratitude for culling the best of the myriad observations and admonitions that have been aired at graduations over the last 25 years. The result is a remarkable anthology, replete with perspicacious bits that transcend the years, and imbued with historical markers that reflect the social and political changes of the past quarter century. It's a volume destined to be popular as a commencement gift and treasured as a reference tool for social scholars.

Smith includes highlights from such speakers as Art Buchwald, Isaac Asimov, George Plimpton, and Madeleine L'Engle in the 1970s, up through the Dalai Lama, Ruth Bader Ginsburg, Andy Rooney, and Madeleine Albright in the 1990s. You can compare the 1977 speeches of Studs Turkel and Shirley Chisholm, the 1990 speeches of Desmond Tutu and Gary Larson, the 1993 remarks of Jodie Foster and Ronald Reagan, the 1995 addresses of Annette Bening and Ann Richards, and the 1999 presentations of Alan Greenspan and Mumia Abu-Jamal. You can track the cultural shift of issues and values through the wit and exhortations of the speakers. And, if you read these snippets of sagacity in a quiet moment when you can concentrate and reflect, you might actually be able to absorb some of the acumen that was deflected by your mortarboard during your own commencement. --Stephanie Gold

Peter J. Smith is a fiction writer and journalist. He is the author of the novel A Good Family, and his work has appeared in a variety of magazines, including The New Yorker, The New York Times Magazine, New York, and Life. He lives with his family in western Massachusetts.