Items related to A Region Not Home: Reflections From Exile

McPherson, James Alan A Region Not Home: Reflections From Exile

A Region Not Home: Reflections From Exile 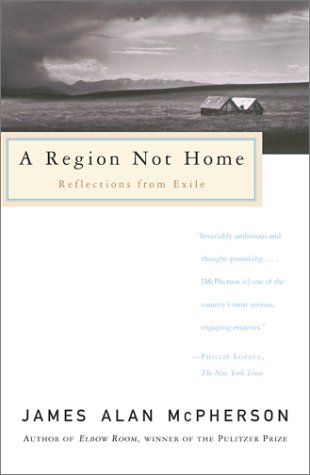 In this deft collection of essays, Pulitzer Prize-winning author James McPherson offers poignant and lively interpretations of life that illuminate the ebb and flow of its sorrows and delights, and reveals his search for connections between everyday drudgery and a greater sense of purpose. He writes of the longing of the human soul by unifying thoughts of his deep affection for his daughter and the meaning of Disneyland; transcendental meanings in life and the tedium of long waits in airports, coming to self-knowledge and the cruel rituals of fraternity pledge week. A beautiful meditation on what it means to be human -- an enlightening and soulful work reaching to the core of suffering and joy.

James Alan McPherson's essays are purposive in the largest sense of the word: These narratives are headed somewhere, specifically, toward an America that he is in the process of imagining, a place of equity and deliberate thoughtfulness. Born poor and black in the American South, McPherson has had a great intellectual adventure leading him a merry, brainy chase all over the States, into all levels of society. This Pulitzer Prize winner spends half his book, it seems, listing the towns where he has lived, centers of American thoughtfulness: Cambridge, Berkeley, Iowa City. And his writing, while never losing sight of his greater intent, reflects this sprawling journey. Certainly, in terms of topic: A Region Not Home finds him holding forth on Disneyland, homelessness, a suicidal student, Ralph Ellison. And also in form: He's fond of expansion, inclusion, never-quite-explicit connectives between disparate events. His far-reaching "Ukiyo" recalls the best essay of the last decade--Jo Ann Beard's "The Fourth State of Matter"--in its juggling prowess: All the balls stay in the air, all the time. In "Ukiyo," 20 short pages encompass McPherson's bout with meningitis, the legacy of the '60s, Clinton's impeachment, family reunions, and the golden rule. He also weaves in a singsong recitation of all the names of all the people who helped him during his illness ("Ted Wheeler, a track coach, cooked a meal and brought it to me for a special lunch"), offering a homey counterpoint to his philosophizing. Along the way, McPherson mentions a lesson from his education:

Paul Freund, who taught me constitutional law at Harvard, used to say that his students knew all the answers without knowing any of the basic questions. I think now that I was trying to learn the basic questions through reading so that, when combined with my own experiences, I could develop a national mind--a sense of how the entire culture, regional, ethnic, class, institutional, functioned together, as a whole.

McPherson's peculiar derring-do is that he attempts, every time, to think with a "national mind." Sometimes he succeeds, but even his failures are gallant, edifying, and spectacular to watch. --Claire Dederer About the Author:

James Alan McPherson is the author of Crabcakes, Hue and Cry, Railroad, and Elbow Room, for which he won a Pulitzer Prize in 1978. His essays and short stories have appeared in numerous periodicals -- including The New York Times Magazine, Esquire, the Atlantic Monthly, Newsday, Ploughshares, the Iowa Review, and Double-Take -- and anthologies such as volumes of The Best American Short Stories, The Best American Essays, and O. Henry Prize Stories. McPherson has received a Guggenheim Fellowship and a MacArthur Prize Fellows Award, and he was elected to the American Academy of Arts and Sciences in 1995. He is currently a professor of English at the Iowa Writers' Workshop.

A Region Not Home: Reflections From Exile