Items related to Unspeakable Acts: The Ordeal of Thomas Waters-Rimmer 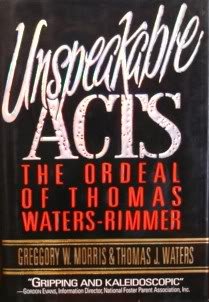 From Kirkus Reviews:
A horrific tale of child abuse told--with, unfortunately, little skill--by the victim (now 18) and Rutgers Univ. journalism professor Morris (The Kids Next Door, 1985). Tom Waters, Jr., seems to have been born under a bad star: When he was 18 months old, his mother died trying to perform an abortion on herself. His father, Tom, Sr., packed up the boy and his four sisters and made the highway their new home. The kids slept on mattresses in the back of their pickup truck while Dad tanked up at roughhouses and returned to beat them up. When Tom, Sr., finally settled down and remarried, the truth came out- -besides beating his children, he'd also sexually molested them. Tom, Jr., was removed by social agencies and placed in a new home--where his foster father also proceeded to molest him until Tom, at age 17, at last refused to be abused any longer. Morris leaves no stone unturned in his labyrinthine explorations of the Waters family, including the innuendo that Tom's mother died from drinking a poisoned can of Coca-Cola. But the text lacks any well-defined sense of forward movement; is overloaded with minor characters whose place is unclear; and is written in an industrial style that ill serves its story. While one can sympathize with Waters's attempt through writing to confront, and to free himself from, the evil that's plagued his young life, his memoir ends up having little to offer others. (Twenty-five b&w photographs--not seen) -- Copyright ©1993, Kirkus Associates, LP. All rights reserved.
From Publishers Weekly:
Waters, one of four children, was the only son of their abusive, alcoholic father, Tom Sr. His mother died when he was 18 months old, perhaps beaten to death by her husband. Some three years later, when Tom Sr.'s abuse became apparent, the children were taken away. Children's Services placed Waters and his sister Patty with their father's second wife's sister and her husband, Carl Rimmer, because "they were family," despite the fact that the department was apparently aware of allegations that Carl had previously molested a young boy. Waters was sexually abused by his foster father (which Carl admits) until his sisters rescued him at age 16. In 1987, as a college freshman, Waters sued the Lorain County (Cleveland) Children's Services Board for $5 million, not so much for the money, he claims, as for the future of other children. Waters and Morris, author of The Kids Next Door , knit together the grisly details of Waters's life in an overlong book marred by the intrusiveness of Morris's voice and by his tangential obsession with the death of his mother. Waters won his suit and Carl went to prison. Photos not seen by PW.
Copyright 1993 Reed Business Information, Inc.

UNSPEAKABLE ACTS: THE ORDEAL OF