Items related to The Imaginative Landscape of Christopher Columbus (Princeton... 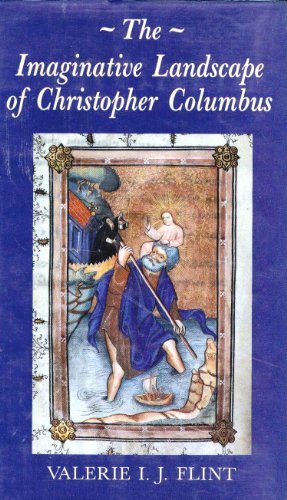 Rather than focusing on the well-rehearsed facts of Columbus's achievements in the New World, Valerie Flint looks instead at his imaginative mental images, the powerful "fantasies" that gave energy to his endeavors in the Renaissance. With him on his voyages into the unknown, he carried medieval notions gleaned from a Mediterranean tradition of tall tales about the sea, from books he had read, and from the mappae-mundi, splendid schematic maps with fantastic inhabitants. After investigating these sources of Columbus's views, Flint explains how the content of his thinking influenced his reports on his discoveries. Finally, she argues that problems besetting his relationship with the confessional teaching of the late medieval church provided the crucial impelling force behind his entire enterprise. As Flint follows Columbus to the New World and back, she constantly relates his reports both to modern reconstructions of what he really saw and to the visual and literary sources he knew. She argues that he declined passively to accept authoritative pronouncements, but took an active part in debate, seeking to prove and disprove theses that he knew to be controversial among his contemporaries. Flint's efforts to take Columbus seriously are so convincing that his belief that he had approached the site of the earthly Paradise seems not quaint but eminently sensible on his own terms.

In Flint's complex, speculative portrait, Columbus emerges as a Renaissance man freighted with medieval baggage, one whose inner vision of a world teeming with terrors and promises colored almost all he saw. Columbus occasionally wore a Franciscan habit, and in his self-justifying need to find a higher motive for his pursuit of gold, he turned to the messianic message of Franciscan friars, according to the author, a New Zealand history professor. She also contends that mappae mundi (schematic maps illustrated with biblical figures and mythic monsters) as well as Mediterranean and early Christian sea stories fortified the explorer's ambitions. Her theory remains conjectural, however, since we don't know exactly which maps he had seen. Books that Columbus read and annotated attest to his belief in forbearance in the face of suffering. The Genoese mariner's certainty that he had located the Terrestrial Paradise posited by theologians and mapmakers, in Flint's assessment, flowed logically from the medieval geography and worldview he carried in his head. Illustrated.
Copyright 1992 Reed Business Information, Inc.

This distinctive scholarly study is concerned not with the facts of Columbus's exploits but with his "vivid inner vision." Flint (history, Univ. of Auckland; author, The Rise of Magic in Early Medieval Europe , Princeton Univ. Pr., 1991) analyzes in detail the admiral's knowledge of maps, sea lore, his known reading, and religious beliefs, which she argues formed the certainty of his vision and, in turn, impelled him to success and colored all that he did and described on his voyages. His conviction that he had reached India, for example, was supported by the extraordinary similarity of his written sources and what he actually saw in the Caribbean. Flint makes plausible what sometimes seems peculiar to us in hindsight, even Columbus's conclusion that he had sailed near the biblical earthly paradise. Highly recommended, particularly for academic libraries.
-William F. Young, SUNY at Albany Lib.
Copyright 1992 Reed Business Information, Inc.

1. The Imaginative Landscape of Christopher Columbus