Items related to The Trouble with Being Born

The Trouble with Being Born 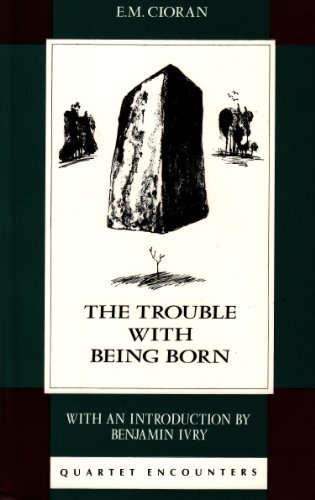 In this volume, which reaffirms the uncompromising brilliance of his mind, Cioran strips the human condition down to its most basic components, birth and death, suggesting that disaster lies not in the prospect of death but in the fact of birth, "that laughable accident." In the lucid, aphoristic style that characterizes his work, Cioran writes of time and death, God and religion, suicide and suffering, and the temptation to silence. Through sharp observation and patient contemplation, Cioran cuts to the heart of the human experience.

“A love of Cioran creates an urge to press his writing into someone’s hand, and is followed by an equal urge to pull it away as poison.”—The New Yorker

“In the company of Nietzsche and Kierkegaard."—Publishers Weekly

"No modern writer twists the knife with Cioran's dexterity. . . . His writing . . . is informed with the bitterness of genuine compassion."—Boston Phoenix

E. M. Cioran left his native land of Romania for Paris in the late 1930s, where he lived and wrote until his death in 1995. His many books include Anathemas and Admirations,  A Short History of Decay, and The Trouble with Being Born.

1. The Trouble with Being Born

Book Description Quartet Books. Paperback. Condition: Very Good. A copy that has been read, but remains in excellent condition. Pages are intact and are not marred by notes or highlighting, but may contain a neat previous owner name. The spine remains undamaged. At ThriftBooks, our motto is: Read More, Spend Less. Seller Inventory # G0704301806I4N00

2. The Trouble with Being Born

Book Description Quartet Books, 1993. Condition: Good. A+ Customer service! Satisfaction Guaranteed! Book is in Used-Good condition. Pages and cover are clean and intact. Used items may not include supplementary materials such as CDs or access codes. May show signs of minor shelf wear and contain limited notes and highlighting. Seller Inventory # 0704301806-2-4

3. The Trouble with Being Born