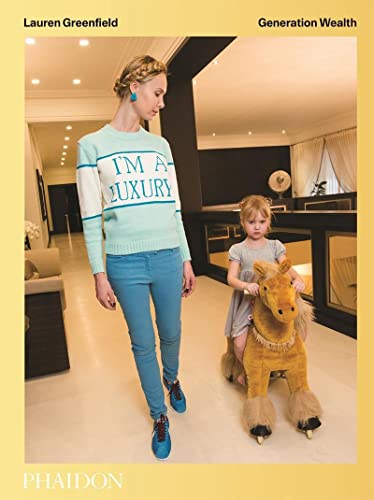 A highly anticipated monograph from the internationally acclaimed documentary photographer and filmmaker. Now a major theatrical, DVD and download release

Lauren Greenfield: Generation Wealth is both a retrospective and an investigation into the subject of wealth over the last twenty-five years. Greenfield has traveled the world - from Los Angeles to Moscow, Dubai to China - bearing witness to the global boom-and-bust economy and documenting its complicated consequences. Provoking serious reflection, this book is not about the rich, but about the desire to be wealthy, at any cost.

Lauren Greenfield is an Emmy-award-winning photographer and filmmaker. A preeminent chronicler of youth culture, gender, and consumerism, her documentary The Queen of Versailles won the Best Documentary Director Award at Sundance in 2012. Her photographs have been widely published, exhibited - and collected - and her Super Bowl commercial, Like a Girl, went viral and swept the advertising awards of 2015.

Juliet Schor is an author, economist, cultural critic, and professor of sociology at Boston College. Her research focuses on the economics of work, spending, the environment, and consumer culture.

Trudy Wilner Stack was Curator of Exhibitions & Collections at the Center for Creative Photography, the University of Arizona for over a decade, after holding positions at the Pennsylvania Academy of the Fine Arts, the International Center of Photography, and the Birmingham Museum of Art. She has curated dozens of exhibitions of contemporary and historical photography around the world, and is a frequent contributing author and lecturer.

Lucie Award for "Best Book Photographer of the Year", 2017

"An insightful and scathing look at society's obsession with excess."—Screen International

"Greenfield is on to something in this unexpectedly personal documentary of the same name - she makes a compelling argument for a society on the brink of precipitous decline."—Variety

"Generation Wealth (the film) succeeds in its whiplash, globe-spanning look at the roller-coaster of soul-devouring narcissism and wealth, and it also finds depth in Greenfield's self-examination. Maybe for it to stick any of its thematic or ideological landings, I'd have to buy the book."—Hollywood Reporter

"For nearly three decades, Greenfield has been meticulously documenting wealth [her] ongoing examination of wealth feels more urgent than ever." —Artsy

"Generation Wealth is a comprehensive study of excess and evolution. Revolting and revelatory, sobering and stunning. Lauren Greenfield is the Doris Kearns Goodwin of the visual medium."—Jamie Lee Curtis

"Lauren Greenfield's photographs range from hilarious to terrifying, sometimes in the same image. The images are unjudgemental - dystopian shock and awe somewhere at the end of Empire - and yet moving: she makes it personal. It could have been me."—Brian Eno

"Greenfield is a prodigious talent, and this book is a masterpiece. If I had the privilege of putting together the time capsule left underground for future generations, I am certain that Generation Wealth would be in the box."—Juliet Schor

"Generation Wealth takes us down the yellow brick road where we are able to see who we, as a collective, are becoming. Like Studs Terkel with a camera, Greenfield's lens allows us to watch the transmogrification of the American Dream of success through hard work, modesty and discipline turn into a nightmare of conspicuous wealth, excess and addiction... Whether the photographs are humorous, heart-wrenching or both we never feel judgement, just observation and that observation gives us room to know we are all complicit in varying degrees."—Jennifer Beals

"A staggering indictment of materialism."—Smithsonian

"[Greenfield] treats her subjects as individuals, but her work derives its greatest power from its ability to succinctly and enthrallingly chart a larger national story. All that glitters is not gold."—Brooklyn Rail

"With a golden cover and 650-odd images inside, [Generation Wealth] is a sociological record of the extreme measures taken to acquire and spend money, what Greenfield calls "the influence of affluence."—The New York Times

"[A]n anthropological deep-dive into the way the very idea of wealth has infected the human psyche globally."—Los Angeles Times

"It is an artist's special privilege to gain access to the world of the rich - and one of her noblest callings is to show the rest of us what that looks like, how money functions, how the system works. It's hard to think of anyone who does it with as much diligence as Greenfield."—The Times Magazine

Book Description Hardback. Condition: New. Language: English. Brand new Book. A highly anticipated monograph from the internationally acclaimed documentary photographer and filmmaker Lauren Greenfield: Generation Wealth is both a retrospective and an investigation into the subject of wealth over the last twenty-five years. Greenfield has traveled the world - from Los Angeles to Moscow, Dubai to China - bearing witness to the global boom-and-bust economy and documenting its complicated consequences. Provoking serious reflection, this book is not about the rich, but about the desire to be wealthy, at any cost. Seller Inventory # AAZ9780714872124

Shipping: US$ 10.01
From United Kingdom to U.S.A.
Destination, rates & speeds

Shipping: US$ 27.84
From United Kingdom to U.S.A.
Destination, rates & speeds