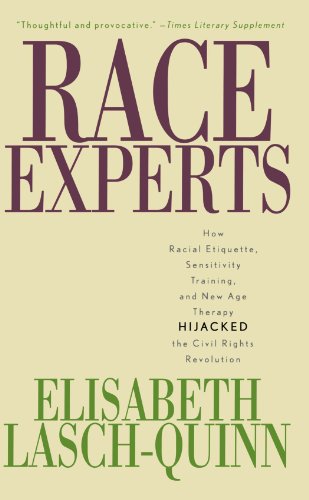 Controversial and strikingly original, Race Experts looks at how we capsized racial progress in the quest for self-esteem. Now available in paperback, it uncovers the hidden trajectory and terms of our thinking about race relations since the 1960s. Since segregation's dismantling, intense anxiety has surrounded interracial encounters, and a movement has arisen to engineer social relations through the specification of elaborate codes of conduct. Diversity Training in business, multicultural education in schools, and cross-cultural psychotherapy have created a world of prescriptions. Elisabeth Lasch-Quinn carefully examines the teachings of these self-appointed "experts" and offers a bold and searching analysis of the origins of their ideas in the human potential movement and the radical milieu of the 1960s. Casting race primarily as an issue of etiquette or therapy, rather than of justice or equality, has had dire consequences for American life, diverting attention from the deeper problems of poverty, violence, and continued inequality and discrimination. In this sobering analysis, Race Experts illuminates how far away we are from the issues that deserve our attention.

Elisabeth Lasch-Quinn is the author of Black Neighbors (winner of the Berkshire Prize), professor of history at Syracuse University, and a frequent contributor to The New Republic. She lives in Syracuse, New York with her husband, Ray, and two daughters, Isabel and Honoré.

Elisabeth Lasch-Quinn has written an important book. It can be read in at least three ways: As a courageous critique of the racial etiquette that has become institutionalized in post-integration America. As a case study of the pervasive psychologization of American culture. And as a Menckenesque account of the way in which both cultural developments can be exploited lucratively by alleged experts. The reader will consecutively nod with recognition, laugh somewhat bitterly, and perhaps even get angry. (Peter Berger, author of The Social Construction of Reality)

America's racial crisis is getting worse. While there is plenty of blame to go around, much falls on 'race experts' who disseminate disinformation and promote thinly disguised totalitarian ideology. In clear, hard-hitting English, Elisabeth Lasch-Quinn presents a well-reasoned and well-balanced analysis that exposes an insidious racket. Race Experts contributes significantly to the two-front struggle against racism and demagogy. (Eugene D. Genovese, author of Roll, Jordan, Roll)

This is a book for those who want more specifics on how the activists in the Civil Rights Movement―aided and abetted by pandering white liberal elites―are in full retreat from the American principle of color-blindness, and are now celebrating race-consciousness and 'racial differences.' As a whole, it is an essential primer, replete with eye-opening horror tales of political correctness, including the antics of racial/ethnic stereotype-reinforcement, which masquerade as 'sensitivity' and diversity training in workplaces and schools. Moreover, this is a handy reference for those already knowledgeable but thoroughly fed up with the histronics of racial therapy, which plays on guilt, and touchy feelings, rather than on evidence and intellect as the basis for evaluating ideas and overcoming parochial prejudices. (Michael Meyers, executive director, New York Civil Rights Coalition)

After a talk I once gave suggesting new practical paths that the Civil Rights movement might take, a black student told me disappointedly that she had expected that I would lend her guidance in 'forming an identity.' Race Experts crisply uncovers the source of this student's expectation. Elisabeth Lasch-Quinn deftly shows how the original Civil Rights leaders' quest for concrete community uplift has been hijacked by attempts to police and cleanse the thought processes of individuals. Anyone seeking truly to understanding the theatrics of Jesse Jackson, the black white score gap in education, the new career of 'diversity counselor,' the rise and fall of the Black Panthers, or many other often perplexing aspects of America's racial landscape cannot afford to let this book pass them by. (John McWhorter, author of Losing the Race)

Richly textured and throughly readable, Race Experts boldy explores the dense thicket of contemporary racial confusions about self-identity and color consciousness. How refreshing it is to find a work so crammed with common sense on a topic that too often has prompted scholarly muddle-headedness and theoretical overkill. Joining the trenchant work of Orlando Patterson and Darly Scott, Race Experts should draw wide acclaim. (Bertram Wyatt-Brown, author of The Shaping of Southern Culture)

In this insightful and troubling book, Lasch-Quinn explores the subtle and not so subtle ways in which the reification of race is perpetuated, despite the absence of biological evidence for the existence of race itself and even in the name of fighting racism. (David Noble, author of America by Design)

Race Experts is an important book, which should be read by every corporate leader, every educator, and every parent. Lasch-Quinn explains carefully and quietly how the idealistic goals of the civil rights movement have been displaced by misguided 'therapies' that promote racial divisiveness and narcissism, which harm all of us. (Diane Ravitch)

Race Experts is the first book to link together America's two favorite conversations, the one about self-help and the one about race. There is enough sloppy thinking and posturing on both subjects to make this book an effective and necessary one. (The New York Times Book Review)

Elisabeth Lasch-Quinn argues quite convincingly that multiculturalism and ethnic diversity programs might instead breed contempt for and condescending behavior toward blacks. Race Experts is a scathing indictment of the new politically correct thinking on race. (The Washington Times)

An original and impressive presentation that does much to illuminate the current racial situation. (Kirkus)