Items related to Transfer of Power 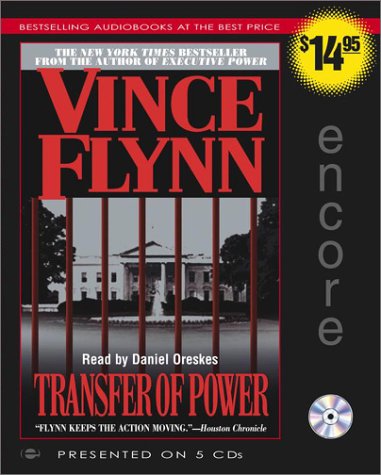 When a gang of terrorists seizes control of the White House, taking hostages, leaving many dead, and driving the president to a secret bunker, it is up to the CIA's top counterterrorism specialist, Mitch Rapp, to stop the insurrection. Reissue.

Vince Flynn is a graduate of the University of St. Thomas in St. Paul, Minnesota. He lives in the Twin Cities with his wife and three children. Visit his website at VinceFlynn.com.

Persian Gulf, 3:16 A.M. (local time)
In the Iranian seaside city of Bandar Abbas an elderly man shuffled down a dusty street in his dirty white djellaba, a simple robelike garment that flowed from his shoulders to his ankles. A brown turban covered his head and face; a pair of worn leather sandals, his feet. The wind blew in off the Persian Gulf, and the night sky was filled with thick clouds.
The decrepit old man mumbled to himself in Farsi, the native language, as he went. Like so many things in life, appearances could be deceiving. Underneath the ragged turban and djellaba was one hundred ninety pounds of solid, lean muscle. Mitch Rapp, a thirty-one-year-old American, hadn't showered in a week. His deeply bronzed skin was covered with a film of dirt, and his black hair and beard were spotted with streaks of gray dye that made him look twice his age.
During the late mornings and early afternoons, the American had slept in a tiny apartment. By afternoon and evening he roamed the streets with a brown canvas bag collecting discarded pop cans and bottles. While he played the role of street bum, he kept his posture slouched and his demeanor timid. But his eyes and mind were alert. He scanned doorways and windows and listened to conversations -- waiting for a clue. Two days earlier he had discovered the telltale sign he had been looking for. Rapp was searching for a man, a man he wanted to kill.
His pursuit of this man had led him to some of the roughest and dirtiest cities in the Middle East, North Africa, and Europe. In the process Rapp had himself been shot, stabbed, and hunted, and every step of the way his quarry had managed to stay just out of his reach. Six months earlier, on a rainy Paris night, Rapp had had his chance and blown it. A moment of hesitation, of stupid indecision, had allowed Rafique Aziz to escape by the narrowest of margins. Never again, Rapp had sworn a thousand times. Next time he would pull the trigger -- innocent bystander in the way or not.
Tonight, Rapp was determined to pick up the trail again. Nearing the house he had discovered two days earlier, Rapp scanned the rooftops and windows for signs of sentries he might have missed on his previous visits. The smell of the salty air mixing with the open sewage heightened his instincts. He was on enemy ground, walking straight into the lion's den. The streets he walked belonged to Hezbollah, one of several militant Islamic groups that dominated the underbelly of Middle Eastern politics. The terrorist group had killed thousands in their jihad -- their holy war. This was their stronghold in the dirty seaside city of Bandar Abbas. Rapp had learned early in his profession that home was where his enemies were most vulnerable, where they were most likely to feel comfortable and let down their guard. Tonight he would come into their home -- unannounced and uninvited.
Rapp adjusted his turban to conceal everything but his eyes. Then, he turned the corner and continued the shuffle of a man more than twice his age. Several doors down a man sat on a folding chair with an AK-47 resting on his lap.
Rapp mumbled to himself in Farsi, intentionally trying to alert the bodyguard to his presence. The bodyguard heard his approaching footsteps and aimed his gun in the direction of the noise. The babbling tramp appeared from the shadows, and the bodyguard relaxed, dropping his weapon back onto his lap. It was his crazy late-night visitor, just another worthless vagrant.
As Rapp approached the bodyguard, he pulled his turban away from his mouth. Smiling, he flashed a set of fake rotten teeth and greeted the armed sentry as he shuffled past. The large man nodded and then leaned back in his chair, resting his head against the wall of the house.
Rapp continued down the street, his alert eyes taking inventory of everything on the block. He noted every window and every doorway. He looked beyond the doorframes and the curtains, into the shadows. If this was a trap, that was where they would be waiting.
Rapp turned onto an even narrower street. Sixty feet down, the American ducked into an alley that had been b...