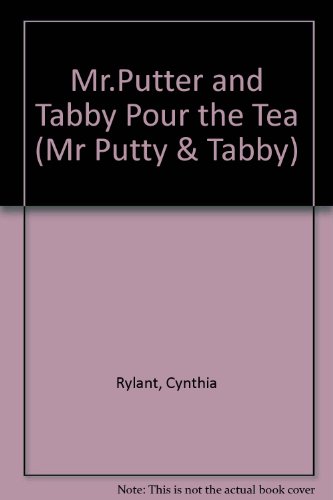 A winsome and warm-hearted series of early readers which follow the adventures of Mr Putter and his best friend, a tabby cat. PAINT THE PORCH: chaos reigns when Mr Putter decides to paint his porch. Paint goes all over his Tabby, and all over the dog who lives next door. POUR THE TEA: Mr Putter is lonely, so he goes in search of a cat, he doesn't want a kitten - just a nice cat who'll settle down with him and enjoy the same lifestyle. Tabby is a thin old cat, and is just perfect for him. They go back home together and enjoy a comforting tea.

Cynthia Rylant is the acclaimed author of more than eight books for young children. She has received the Newbery Medal for one of her books.

Two tales about companionship mark the highly propitious start of a new series. The gentle, affecting first volume introduces elderly Mr. Putter, who decides that a cat will keep him from feeling lonely. Only kittens are available at the pet store (" 'Oh, no one wants cats, sir,' said the pet store lady. 'They are not cute. They are not peppy.' Mr. Putter himself has not been cute and peppy for a very long time"). At the animal shelter, however, he finds Tabby, a decidedly old yellow-and-white cat who needs a friend, too. In the second installment, quicker paced if less true to life, Mr. Putter and Tabby offer to take care of a neighbor's bulldog, Zeke, only to discover that Zeke isn't the darling "little lollypup" his owner believes him to be. Rylant's ( Missing May ; the Henry and Mudge series) texts, each broken into three short chapters, reflect admirable concern for brevity and meticulous consideration of every word. They are in perfect sync with Howard's expressive sketches, which slip abundant visual jokes into sunny, transparent watercolors and gouaches, and fluid pencil and pastel scribbles. Because the animals aren't strongly anthropomorphized, a sense of realism prevails, and the overall effect is sweet but never schmaltzy. Winsome and warmhearted, these books could become instant favorites. Ages 6-10.
Copyright 1994 Reed Business Information, Inc.

3. Mr.Putter and Tabby Pour the Tea (Mr Putty and Tabby)

Book Description Franklin Watts Ltd, 2002. Paperback. Condition: Used; Good. **Simply Brit** Shipped with Premium postal service within 24 hours from the UK with impressive delivery time. We have dispatched from our book depository; items of good condition to over ten million satisfied customers worldwide. We are committed to providing you with reliable and efficient service at all times. Seller Inventory # 3042467

Book Description Franklin Watts Ltd, 2002. Paperback. Condition: Good. Ex-Library Book. Has usual library markings and stamps inside. All orders are dispatched the following working day from our UK warehouse. Established in 2004, we have over 500,000 books in stock. No quibble refund if not completely satisfied. Seller Inventory # mon0003825886

Shipping: US$ 7.39
From United Kingdom to U.S.A.
Destination, rates & speeds

Book Description -. Paperback. Condition: Very Good. Mr.Putter and Tabby Pour the Tea (Mr Putty & Tabby) This book is in very good condition and will be shipped within 24 hours of ordering. The cover may have some limited signs of wear but the pages are clean, intact and the spine remains undamaged. This book has clearly been well maintained and looked after thus far. Money back guarantee if you are not satisfied. See all our books here, order more than 1 book and get discounted shipping. Seller Inventory # 7719-9780749642068

Shipping: US$ 8.62
From United Kingdom to U.S.A.
Destination, rates & speeds

6. Mr.Putter and Tabby Pour the Tea

Book Description Franklin Watts Ltd 2002-07-11, 2002. Paperback. Condition: Very Good. Item is in very good condition. If supplemental codes/CDs for textbooks are required please contact us prior to purchasing as they may be missing. Seller Inventory # DS-0749642068-2