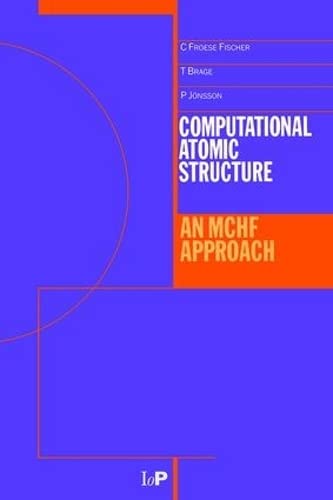 Computational Atomic Structure: An MCHF Approach deals with the field of computational atomic structure, specifically with the multiconfiguration Hartree-Fock (MCHF) approach and the manner in which this approach is used in modern physics. Beginning with an introduction to computational algorithms and procedures for atomic physics, the book describes the theory underlying nonrelativistic atomic structure calculations (making use of Brett-Pauli corrections for relativistic effects) and details how the MCHF atomic structure software package can be used to this end. The book concludes with a treatment of atomic properties, such as energy levels, electron affinities, transition probabilities, specific mass shift, fine structure, hyperfine-structure, and autoionization. This modern, reliable exposition of atomic structure theory proves invaluable to anyone looking to make use of the authors' MCHF atomic structure software package, which is available publicly via the Internet.