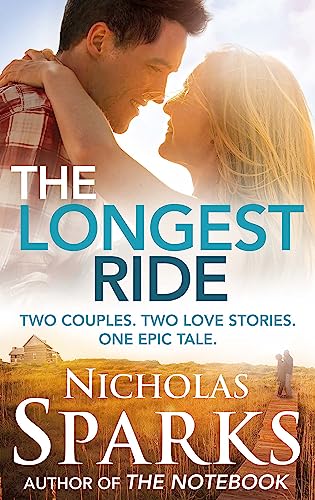 With over 105 million copies of his books sold, Nicholas Sparks is one of the world's most beloved storytellers. His novels include thirteen number one New York Times bestsellers. All Nicholas Sparks' books have been international bestsellers and have been translated into more than fifty languages. Eleven of his novels have been adapted into major films - The Longest Ride, The Best of Me, Safe Haven, The Lucky One, The Last Song, Dear John, Nights in Rodanthe, Message in a Bottle, A Walk to Remember, The Notebook and The Choice. For all the latest news from Nicholas Sparks, sign up for his e-Newsletter at www.nicholassparks.com, and follow him on Facebook and Twitter: @NicholasSparks.

Will suck you in and leave you a sobbing mess * Star Magazine * (Sparks) has a canny knack of tapping into what makes us human, and before you know it, you are rooting for Ira and engrossed in his life story * Irish Independent * A fiercely romantic and touching tale, with the added bonus of a sexy cowboy. When it comes to tales about love, Nicholas Sparks is one of the undisputed kings * Heat * Nicholas Sparks clearly knows how to tug at heartstrings and so he proves again with this tale of two love stories . . . The fortunes of both romances are described with a noticeably old-fashioned tenderness which prizes love and devotion and which, especially in Ira's story, provides a proper, old-fashioned weepie * Daily Mail *

Book Description 2014. Paperback. Condition: New. Paperback. Two couples. Two love stories. One epic tale.Ninety-one-year-old Ira Levinson is in trouble. Struggling to stay conscious after a car crash, with his mind fading, an image of his adored - .Shipping may be from multiple locations in the US or from the UK, depending on stock availability. 464 pages. 0.350. Seller Inventory # 9780751549966

Book Description Brown Book Group Little Jun 2014, 2014. Taschenbuch. Condition: Neu. Neuware - Two couples. Two love stories. One epic tale. Ninety-one-year-old Ira Levinson is in trouble. Struggling to stay conscious after a car crash, with his mind fading, an image of his adored - and long-dead - wife Ruth appears. Urging him to hang on, she lovingly recounts the joys and sorrows of their life together - how they met, the dark days of WWII and its unrelenting effect on their families. A few miles away, college student Sophia Danko's life is about to change. Recovering from a break-up, she meets the young, rugged Luke and is thrown into a world far removed from her privileged school life. Sophia sees a new and tantalising future for herself, but Luke is keeping a secret that could destroy it all. Ira and Ruth. Sophia and Luke. Two couples, separated by years and experience, whose lives are about to converge in the most unexpected - and shocking - of ways. The new love story from the multi-million-copy bestselling author of The Notebook, The Lucky One and The Best of Me. Nicholas Sparks is one of the world's most beloved authors. 464 pp. Englisch. Seller Inventory # 9780751549966

Book Description 2014. Paperback. Condition: New. Paperback. Two couples. Two love stories. One epic tale.Ninety-one-year-old Ira Levinson is in trouble. Struggling to stay conscious after a car crash, with his mind fading, an image of .Shipping may be from our Sydney, NSW warehouse or from our UK or US warehouse, depending on stock availability. 464 pages. 0.350. Seller Inventory # 9780751549966