Items related to In a Strange City (A Tess Monaghan Investigation)

Lippman, Laura In a Strange City (A Tess Monaghan Investigation)

In a Strange City (A Tess Monaghan Investigation) 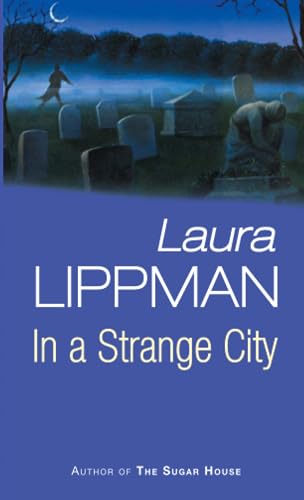 It was a case Tess turned down - but now she's caught up in a web of obsession and murder . . .Every year on 19 January for the past fifty years an unknown visitor has left three red roses and a half-empty bottle of cognac on the grave of Edgar Allan Poe. When a prospective client asks PI Tess Monaghan to investigate, she refuses - after all, no crime is being committed.But she does go to the 19 January vigil as an observer. In the freezing darkness she watches as two cloaked figures approach the grave, appear to embrace and then part. Then there's a gunshot and one is killed. Tess quickly learns that the dead man is not the regular visitor. So who is he? And why was he there? When it turns out that Tess's would-be client had given her a fake name, she knows she must try to find him. Then an old friend from her past surfaces, claiming that the shooting was a homophobic hate crime, and things get even more complicated.

New York Times bestselling author Laura Lippman’s Tess Monaghan must put her PI skills to the ultimate test when she falls into the crosshairs of a psychopath who knows everything about her.

For the past fifty years on the birth date of Edgar Allan Poe, a person wearing a cloak has placed three roses and a half bottle of cognac on the writer’s gravesite. PI Tess Monaghan has never witnessed the event. But when John P. Kennedy, an eccentric antiques dealer, asks her to uncover the identity of the caped visitor, who he believes has duped him with the sale of an inauthentic antique, Tess decides to hold vigil on the night the cloaked stranger is expected to make an appearance. But the custom takes on a bizarre, fatal twist when two cloaked figures arrive. The imitator leaves his tribute and then makes his escape...after shooting the first visitor.

Warning bells tell Tess to steer clear of this case. But when roses and cognac appear on her doorstep, Tess’s curiosity is piqued. She soon discovers that John P. Kennedy has vanished into thin air and much of what he told her was questionable. Then the identity of the shooting victim comes to light, and all clues seem to point to the possibility he was the target of a hate crime. But Tess isn’t convinced. What was his connection to the decades-long Edgar Allan Poe tradition and to the killer? When more cryptic clues are left at her home, Tess realizes that someone is watching her every move...someone who’s bent on killing again.

Before becoming a full time novelist, Laura Lippman was a newspaper reporter for 20 years, including 12 years at the BALTIMORE SUN. She lives in Baltimore with her partner, the writer David Simon.

1. In a Strange City (A Tess Monaghan Investigation)

Book Description Paperback. Condition: Very Good. The book has been read, but is in excellent condition. Pages are intact and not marred by notes or highlighting. The spine remains undamaged. Seller Inventory # GOR001190313

Shipping: US$ 3.93
From United Kingdom to U.S.A.
Destination, rates & speeds

2. In a Strange City (A Tess Monaghan Investigation)

3. In a Strange City (A Tess Monaghan Investigation)

4. In a Strange City (A Tess Monaghan Investigation)

Book Description Orion Pub Co, 2002. Condition: Good. A+ Customer service! Satisfaction Guaranteed! Book is in Used-Good condition. Pages and cover are clean and intact. Used items may not include supplementary materials such as CDs or access codes. May show signs of minor shelf wear and contain limited notes and highlighting. Seller Inventory # 0752848100-2-4

5. In A Strange City (A Tess Monaghan Investigation)

Book Description Orion, 2002. Paperback. Condition: Used; Good. **SHIPPED FROM UK** We believe you will be completely satisfied with our quick and reliable service. All orders are dispatched as swiftly as possible! Buy with confidence!. Seller Inventory # mon0002007845

6. In a Strange City (A Tess Monaghan Investigation)

Book Description Orion, 2002. Paperback. Condition: Used; Acceptable. Ex-library. Dust jacket is damaged. Page colour - ?discoloured in accordance with book age. **Simply Brit** Shipped with Premium postal service within 24 hours from the UK with impressive delivery time. We have dispatched from our book depository; items of good condition to over ten million satisfied customers worldwide. We are committed to providing you with reliable and efficient service at all times. Seller Inventory # 2995469