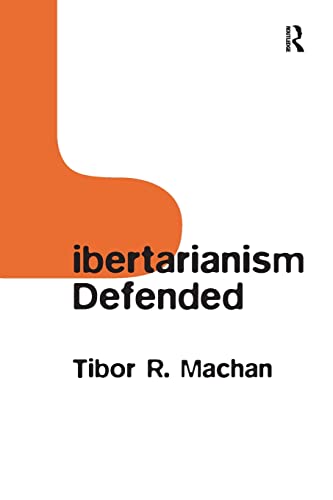 Ever since the publication in 1974 of Robert Nozick's Anarchy, State, and Utopia, libertarianism has been much discussed within political philosophy, science and economy circles. Yet libertarianism has been so strongly identified with Nozick's version of it that little attention has been devoted to other than Nozick's ideas and arguments. While Nozick's version of libertarianism has preoccupied the academic discussion Nozick himself did not respond to the many criticisms raised and yet other defenders of libertarianism have not remained silent. Jan Narveson, Loren Lomasky, Eric Mack, Douglas Rasmussen, Douglas Den Uyl and many others have contributed impressive arguments of their own in support of the libertarian idea that a political system is just when it successfully secures the rights of individuals understood within the Lockean classical liberal tradition. In this book Tibor R. Machan analyses the state of the debate on libertarianism post Nozick. Going far beyond the often cursory treatment of libertarianism in major books and other publications he examines closely the alternative non-Nozickian defenses of libertarianism that have been advanced and, by applying these arguments to innumerable policy areas in the field, Machan achieves a new visibility and prominence for libertarianism.

'In Libertarianism Defended, Tibor Machan has once again demonstrated that he is one of the most important and significant living libertarian philosophers.This book belongs in the library of anyone who understands that there is a philosophical dimension to public policy debate.' Nicholas Capaldi, Loyola University New Orleans 'Machan is one of the few modern philosophers who stands against the Rawlsian presumption of social equality with a moral argument: that no one should be a slave, even to society. Moral arguments drive human destiny. Machan is pointing to the most important claim, that human flourishing cannot exist without individual liberty.' Professor Joe Cobb, Economist 'Machan has the rare ability to see both forests and trees: he has written persuasively on discrete aspects of politics and also on "big-picture" political philosophy. In this timely new book he does some of both. He offers an insightful and comprehensive analysis of libertarianism, its defenders, and its critics, and he also shows how these arguments bear on concrete political and social issues.' Aeon J. Skoble, Bridgewater State College, USA 'For decades, Tibor Machan has been exploring and explaining the ideas of liberty to both the layman and the academic. Libertarianism Defended proves once again that Machan understands freedom better than Hayek, Rothbard, or even Mises. The novice will find a consistent and thorough introduction to liberty; the scholar will find a sophisticated thinker who has answers to some of the most forceful arguments against freedom. Believers will be comforted, the curious will find answers, and critics ignore Machan at their peril.' Timothy Sandefur, Staff Attorney, Pacific Legal Foundation, and Contributing Editor, Liberty Magazine