Items related to Step on a Crack

Patterson, James Step on a Crack

Step on a Crack 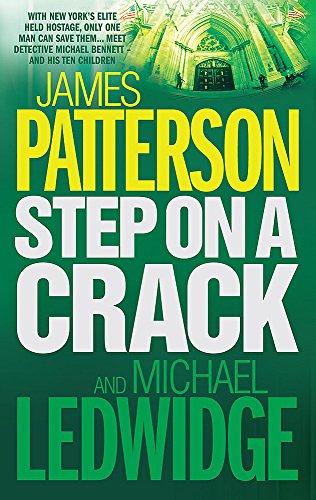 Detective Michael Bennett is about to take on the most sinister challenge of his career. The nation has fallen into mourning after the unexpected death of a beloved former first lady, and the most powerful people in the world gather in New York for her funeral. Then the inconceivable occurs. Billionaires, politicians, and superstars of every kind are suddenly trapped within one man's brilliant and ruthless scenario. Bennett--father of ten--is pulled into the fray. As the danger escalates, Michael is hit with devastating news. After fighting for many years, his wife has succumbed to a terrible disease. As New York descends into chaos, he has lost the great love of his life and faces raising his ten devastated children alone--and rescuing 34 hostages. Day after day, Bennett confronts the most ruthless man he has ever dealt with, a man who kills without hesitation and counters everything the NYPD and FBI throw at him with impunity. As the entire world watches and the tension boils to a searing heat, Bennett has to find a way out--or face responsibility for the greatest debacle in history.

James B. Patterson (born March 22, 1947) is an award-winning American author. Formerly an advertising executive for J. W. Thompson in the early 1990s, Patterson came up with the slogan "Toys R Us Kid". Shortly after his success with Along Came A Spider he retired from the firm and devoted his time to writing. The novels featuring his character, Alex Cross, a black forensic psychologist formerly of the Washington, D.C. Police Department and Federal Bureau of Investigation, now working as a private psychologist and government consultant, are the most popular books among Patterson readers. James Patterson has been criticized by Stephen King, who called Patterson's books "dopey thrillers".[citation needed] Patterson shrugged off the comments, stating that he wants to be the "thrillingest thriller writer of all time".[citation needed] James Patterson has also been put as one of Forbes magazine's top 100 celebrities.

A mass kidnapping at St. Patrick's Cathedral nets many of the world's celebrities gathered for the funeral of a former first lady. Mike Bennett, NYPD detective, father of 10 adopted children whose wife is dying of cancer, must put aside his personal woes and outsmart the well-organized criminals. In these post-9/11 days, Ledwidge and Patterson's scenario seems all too credible. Narrators John Slattery and Reg Rogers create thoroughly believable hostages and hostage-takers, and are especially effective voicing the beleaguered cop, hijacker "Jack," and the reptilian villain, "The Neat Man." Occasional music and sound effects don't add much, but short, intense chapters make it impossible to stop listening to this well-crafted story. S.J.H. © AudioFile 2007, Portland, Maine-- Copyright © AudioFile, Portland, Maine