Items related to Animal: The Definitive Visual Guide to the World's...

Animal: The Definitive Visual Guide to the World's Wildlife 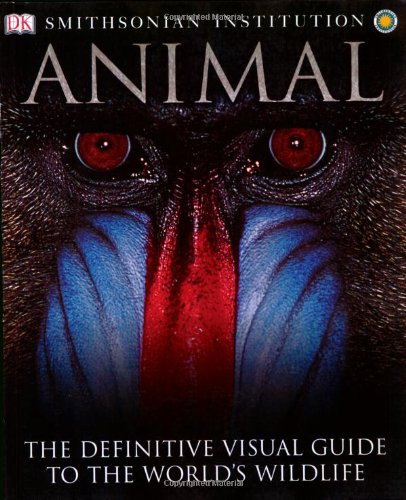 Unrivaled in its breadth and visual impact, this unique guide sets out to illustrate, describe, and explain the incredible range of creatures that make up the animal kingdom. Exceptional Coverage. This authoritative volume starts with a clear introduction to the animal world, examining the reasons for the apparently infinite variety of animal forms and major evolutionary developments. Animal anatomy, life cycles and the principles of classification are also explored. This is followed by a superbly illustrated survey of world habitats, showing how they have adapted to each environment, and the threats that face both wildlife and plants today. The main part of the book, an up-to-date and comprehensive animal catalog, looks in detail at each major group and provides fascinating profiles of over 2,000 individual species. Visually Breathtaking. Spectacular photographic portraits bring a vast array of animals vividly to life, with special features on well-known and important animals such as the Galapagos tortoise. Each species profile is supported by maps and symbols showing distribution and habitat, as well as key information on size, population, and conservation status, forming an invaluable reference database. Outstanding Reference. Clear, comprehensive, and thought provoking, the Smithsonian Animal is essential reading for wildlife enthusiasts of all ages and levels of experience.

Over 2,000 species, from the tiny spider mite to the massive blue whale, are profiled in DK's astonishingly wonderful Animal, produced in cooperation with the Smithsonian Institution and more than 70 expert zoologists. To call this book "profusely illustrated" is to seriously underrepresent page after page of breathtaking photos capturing each creature in sharp images, thrumming with life. Even the page borders are covered with collages of animal skins to indicate which class of organisms is represented in that section--every inch of this heavy book is gorgeous.

Besides heft and beauty, Animal has authority. Editors-in-chief David Burnie and Don E. Wilson are top biologists, and they have assembled a crack team of consultants for each section of the book. For instance, Richard Rosenblatt of the Scripps Institution of Oceanography takes charge of the chapter on fishes, so all the classification, behavior, and distribution data is up-to-date and full of the kind of detail that comes from years of professional specialization. In addition to basic size, location, and status information, each animal gets a short, one- to two-paragraph description, enough to give a feel for the creature:

The blackfin icefish produces a natural "antifreeze," enabling it to survive in the subzero waters of the Antarctic. It lacks red blood cells and hence looks rather pale, but has excellent blood circulation, and a strong heart which weighs as much as that of a small mammal. Its large, toothy mouth led to it being called the crocodile fish by 19th-century whalers.

Biodiversity has never been more at the forefront of biologists' concerns, and Animal reports on the issues critical to ecology, from habitat loss to the species that are most endangered within each class.

This book is an ideal browsing reference for all experience levels, as well as a delightful addition to the collection of any animal enthusiast or classroom. Of necessity, not all species are covered, but as a general source of information down to the genus level, Animal excels. Don't be put off by the price! Extraordinarily beautiful, biologically accurate, and packed with furry, feathery, finny, many-legged delights, Animal is one of the very best science books of 2001. --Therese Littleton

David Burnie, Editor-in-Chief has written over 75 nature books and scripted a number of natural history television documentaries for the BBC and other wildlife productions, such as Survival School and Wild Islands. He has won numerous awards including the Science Book Prize for his book How Nature Works.

1. Animal: The Definitive Visual Guide to the World's Wildlife

2. Animal: The Definitive Visual Guide to the World's Wildlife