Items related to Code Book: The Science of Secrecy from Ancient Egypt...

Code Book: The Science of Secrecy from Ancient Egypt to Quantum Cryptography 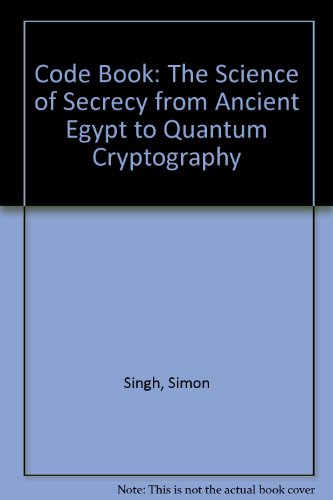 Codes have decided the fates of empires, countries, and monarchies throughout recorded history. Mary, Queen of Scots was put to death by her cousin, Queen Elizabeth, for the high crime of treason after spymaster Sir Francis Walsingham cracked the secret code she used to communicate with her conspirators. And thus the course of British history was altered by a few sheets of cryptic prose. This is just one link in humankind's evolutionary chain of secret communication, and just one of the fascinating incidents recounted in The Code Book, written by bestselling author Simon Singh.

Combining a superb storyteller's sense of drama and a scientist's appreciation for technical perfection, Singh traces the evolution of secret writing from ancient Greek military espionage to the frontiers of computer science. The result is an epic tale of human ingenuity, with examples that range from the poignant to the peculiar to the world-historical.

There is the case of the Beale ciphers, which involves Wild West escapades, a cowboy who amassed a vast fortune, a buried treasure worth $20 million, and a mysterious set of encrypted papers describing its whereabouts--papers that have baffled generations of cryptanalysts and captivated hundreds of treasure hunters.

A speedier end to a bloody war was the only reward that could be promised to the Allied code breakers of World Wars I and II, whose selfless contributions altered the course of history; but few of them lived to receive any credit for their top-secret accomplishments. Among the most moving of these stories is that of the World War II British code breaker Alan Turing, who gave up a brilliant career in mathematics to devote himself to the Allied cause, only to end his years punished by the state for his homosexuality, while his heroism was ignored. No less heroic were the Navajo code talkers, who volunteered without hesitation to risk their lives for the Allied forces in the Japanese theater, where they were routinely mistaken for the enemy.

Interspersed with these gripping stories are clear mathematical, linguistic, and technological demonstrations of codes, as well as illustrations of the remarkable personalities--many courageous, some villainous, and all obsessive--who wrote and broke them.

All roads lead to the present day, in which the possibility of a truly unbreakable code looms large. Singh explores this possibility, and the ramifications of our increasing need for privacy, even as it begins to chafe against the stated mission of the powerful and deeply secretive National Security Agency. Entertaining, compelling, and remarkably far-reaching, this is a book that will forever alter your view of history, what drives it, and how private that e-mail you just sent really is.

Included in the book is a worldwide Cipher Challenge--a $15,000 award will be given by the author to the first reader who cracks the code successfully. Progress toward the solution will be tracked on The Code Book website.

People love secrets, and ever since the first word was written, humans have written coded messages to each other. In The Code Book, Simon Singh, author of the bestselling Fermat's Enigma, offers a peek into the world of cryptography and codes, from ancient texts through computer encryption. Singh's compelling history is woven through with stories of how codes and ciphers have played a vital role in warfare, politics, and royal intrigue. The major theme of The Code Book is what Singh calls "the ongoing evolutionary battle between codemakers and codebreakers," never more clear than in the chapters devoted to World War II. Cryptography came of age during that conflict, as secret communications became critical to either side's success.

Confronted with the prospect of defeat, the Allied cryptanalysts had worked night and day to penetrate German ciphers. It would appear that fear was the main driving force, and that adversity is one of the foundations of successful codebreaking.

In the information age, the fear that drives cryptographic improvements is both capitalistic and libertarian--corporations need encryption to ensure that their secrets don't fall into the hands of competitors and regulators, and ordinary people need encryption to keep their everyday communications private in a free society. Similarly, the battles for greater decryption power come from said competitors and governments wary of insurrection. The Code Book is an excellent primer for those wishing to understand how the human need for privacy has manifested itself through cryptography. Singh's accessible style and clear explanations of complex algorithms cut through the arcane mathematical details without oversimplifying. Can't get enough crypto? Try solving the Cipher Challenge in the back of the book--$15,000 goes to the first person to crack the code! --Therese Littleton

Praise for Fermat's Enigma by Simon Singh:
"Vividly recounted...I strongly recommend this book to anyone wishing
to catch a glimpse of what is one of the most important and
ill-understood, but oldest, cultural activities of humanity...an
excellent and very worthwhile account of one of the most dramatic and
moving events of the century."
--Roger Penrose, The New York Times Book Review

"How great a riddle was Fermat's 'last theorem'? The exploration of
space, the splitting of the atom, the discovery of DNA--unthinkable in
Fermat's time--all were achieved while his Pythagorean proof still
remained elusive...Though [Singh] may not ask us to bring too much
algebra to the table, he does expect us to appreciate a good detective
story."
--The Boston Sunday Globe

"[Singh] writes with graceful knowledgeability of the esoteric and
esthetic appeal of mathematics through the ages, and especially of the
mystifying behavior of numbers." --The New York Times

"[Singh] has done an admirable job with an extremely difficult
subject. He has also done mathematics a great service by conveying the
passion and drama that have carried Fermat's Last Theorem aloft as the
most celebrated mathematics problem of the last four centuries."
--American Mathematical Society

"The amazing achievement of Singh's book is that it actually makes the
logic of the modern proof understandable to the nonspecialist...More
important, Singh shows why it is significant that this problem should
have been solved." --The Christian Science Monitor