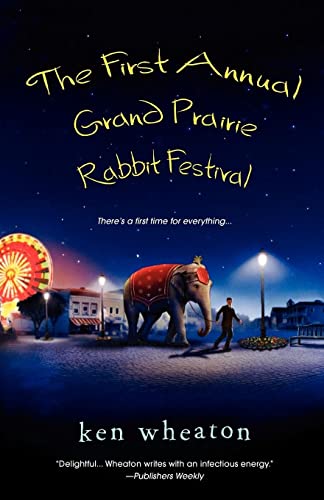 Welcome to Grand Prairie, Louisiana-land of confounding accents, hard-drinking senior citizens, and charming sinners-brought to hilarious life in a bracing, heartfelt debut novel simmering with Cajun spice . . . Father Steve Sibille has come home to the bayou to take charge of St. Pete's church. Among his challenges are teenybopper altar girls, insomnia-curing confessions, and alarmingly alluring congregant Vicky Carrier. Then there's Miss Rita, an irrepressible centenarian with a taste for whiskey, cracklins, and sticking her nose in other people's business. When an outsider threatens to poach Father Steve's flock, Miss Rita suggests he fight back by staging an event that will keep St. Pete's parishioners loyal forever. As The First Annual Grand Prairie Rabbit Festival draws near, help comes from the strangest places. And while the road to the festival may be paved with good intentions-not to mention bake sales, an elephant, and the most bizarre cook-out ever-where it will lead is anyone's guess . . .

Ken Wheaton blends humour, sarcasm, tenderness, and larger-than-life characters in a dazzling debut, set in a small-town Louisiana, that heralds a sharp new voice in Southern fiction that will resonate far beyond the Mason-Dixie line.

*Starred Review* Father Steve, a small-town Louisiana priest, has major problems. First, the women. Denise, a self-styled Lolita, is one of his two altar girls. Miss Rita, a centenarian daughter of a slave who helped raised Steve, lives on the booze, pork skins, and other illegal foods he sneaks into the nursing home. Four female congregants have stopped coming to morning mass because he made eye contact during the service. And Vicky, the illegitimate daughter of the previous priest, is becoming much more than a friend. Father Steve’s other friend, the charming Father Mark, is leaving the priesthood because of issues with his homosexuality. Yet Father Steve considers the Pentecostals to be the biggest thorn in his side. Their charismatic preacher has set up shop just down the road, and will stop at nothing to build his own flock, including wooing the local Catholics. So Father Steve does the only thing he can to keep his church intact: he organizes the First Annual Grand Prairie Rabbit Festival. Readers need to hold onto their hats because Wheaton’s roller-coaster ride of a book has hilarious highs that plunge to soul-baring angst, then zoom back up to the top. --Shelley Mosley