Items related to Maccabee!: The Story of Hanukkah

Maccabee!: The Story of Hanukkah 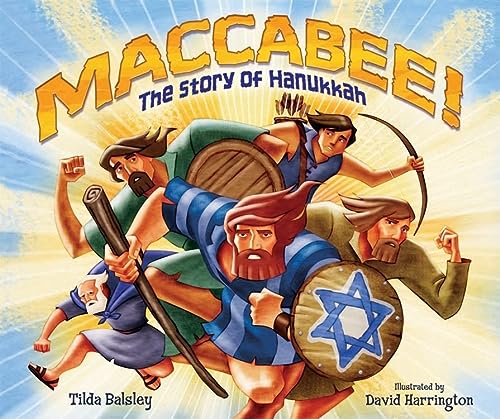 Judah and the little army of Maccabees fight to free Jerusalem from the cruel King Antiochus in this vibrant and action-filled rhyming version of the famous Hanukkah story.

Tilda Balsley has written many books for Kar-Ben, bringing her stories to life with rhyme, rhythm, and humor. Tilda lives with her husband and their rescue Shih Tzu in Reidsville, North Carolina.

David Harrington attended and graduated from Art Center College of Design with a BFA in illustration, awarded with honors, in Pasadena, California. His art has been used in TV, film and video in addition to children's books. He lives in Laguna Hills, CA.

"Rhyming text recounts the Maccabees' stand for religious freedom; clever moments balance out some preachy ones. The text works better to reinforce the story for celebrants than to introduce it to readers of other faiths. Appropriately for the Festival of Lights, Harrington's use of light is the illustrations' greatest strength." --The Horn Book Guide

"From the comic book superhero-like illustrations to the heartfelt repeated chorus of 'Sometimes it only takes a few/Who know what’s right, and do it, too,' this wonderful rhyming retelling of the Chanukah story is sure to be a favourite of adventure-loving little girls and boys."--Noodlenuts

"With its 'little engine that could' vibe and comic book-style illustrations, Maccabee! is sure to entertain young readers as well as inform them on the origins of Hanukkah. Harrington's bold art creates a sense of energy and determination while Balsley's rhyming text urges the story on. An author's note provides additional information on Hanukkah traditions."--School Library Journal, Extra Helping

"As the story goes, after the Jews refused to worship the Greek Gods, King Antiochus took over Jerusalem and ruined the sacred land. Judah and his followers fought back, and as they rebuilt their homeland, they found the legendary oil that burned for eight days. With its superhero-like cartoon drawings and rhyming text, this book makes the story behind Hanukkah not only easy to understand, but enjoyable to listen to as well. The history of the Maccabees becomes memorable with a text that flows without being a forced rhyme. Bold, double page color illustrations reflect the strength of character of the Maccabees. Brief descriptions at the end of the book more fully explain the legend. This book is an enjoyable read-aloud and will appeal to students looking for Hanukkah material. The illustrations and text meld together very well to make this an appealing book with an engaging story that will captivate the reader. Recommended." --Library Media Connection

"The story behind Hanukkah gets the action-figure treatment, with Judah Maccabee as a chiseled hottie. The rhyming text is only serviceable ('So Judah led the scrappy band/ To fight for freedom through the land'), but it hardly matters: the real draw is the high drama of Harrington's sculptural illustrations and their superhero cartoon vibe, as the Maccabees fend off armored elephants and labor to rebuild the temple in Jerusalem." --Publishers Weekly

"Maccabee tells the Hanukkah story, focusing on the actions of the famed heroic family that led the fight in Jerusalem against the idol-loving Greeks and their leader King Antiochus in ancient times (165 B.C.E.). The action in the picture book focuses on the small group of Jews who struggled long ago against the oppression and injustice inflicted by the invading Greeks as well as their resistance to assimilation. Forced idol worshipping and the invading army's desecration of the Temple enrage the Maccabees. They steal away and regroup in the Judean Hills to plan their winning attack on the well-armed invaders. The epilogue jumps to modern day asking the question "What would Judah do?" making the leap to question our modern day observances of the events. The account is told in an accessible rhyme with a refrain "Sometimes it only takes a few,/who know what's right and do it, too." Children will relate to the bright, stylized, cartoon-like illustrations and the characters' dramatic expressions. The compositions are dynamic and bold. For ages 4-8." --Jewish Book World

1. Maccabee! The Story of Hanukkah (Paperback)

2. Maccabee!: The Story of Hanukkah

3. Maccabee!: The Story of Hanukkah

4. Maccabee!: The Story of Hanukkah (Paperback)

Book Description Paperback. Condition: New. Paperback. Shipping may be from multiple locations in the US or from the UK, depending on stock availability. 32 pages. 0.136. Seller Inventory # 9780761345084

5. Maccabee! The Story of Hanukkah (Paperback)

6. Maccabee! The Story of Hanukkah (Paperback)

7. Maccabee!: The Story of Hanukkah

8. Maccabee! The Story of Hanukkah

9. Maccabee!: The Story of Hanukkah

10. Maccabee!: The Story of Hanukkah