Items related to How to Cook Everything: Holiday Cooking (How to Cook... 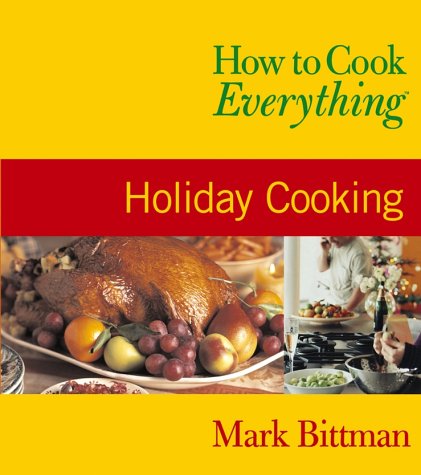 Enjoy cooking for the holidays this year!

Roast Turkey and Gravy. Baked Ham with Maple Glaze. Traditional Apple Pie. Death-by-Chocolate Torte. Holidays are when you pull out all the stops, and with How to Cook Everything(TM): Holiday Cooking, you can make your special feast or buffet spread without stress.

Mark Bittman, the award-winning author of the bestselling kitchen classic How to Cook Everything(TM), shares his favorite simple-and infinitely flexible-holiday recipes. You'll be able to cook for big feasts and parties from Thanksgiving to New Year's and for other holiday gatherings all year-round. To inspire you and help you plan your meals, you'll find Bittman's straight talk on cooking and special features, including:
* Creative recipe variations and ideas
* Tips for shopping, preparing, and cooking the recipes
* Illustrations to demystify trickier techniques
* Menu suggestions for a Traditional Thanksgiving Dinner, a Tree-Trimming Party, an Easter Feast, and more
* At-a-glance icons highlighting recipes that can be made ahead

MARK BITTMAN is the author of 30 acclaimed books, including the How to Cook Everything series, the award-winning Food Matters, and the New YorkTimes number-one bestseller, VB6: Eat Vegan Before 6:00. For more than two decades his popular and compelling stories appeared in the Times, where he was ultimately the lead food writer for the Sunday magazine and became the country’s first food-focused Op-Ed columnist for a major news publication. Bittman has starred in four television series, including Showtime’s Emmy-winning Years of Living Dangerously. He has written for nearly every major newspaper in the United States and many magazines, and has spoken at dozens of universities and conferences; his 2007 TED talk has had more than a million views. In 2015 he was a distinguished fellow at the University of California, Berkeley; he is currently a fellow at the Union of Concerned Scientists. Throughout his career Bittman has strived for the same goal: to make food, in all its aspects, understandable. He can be found at markbittman.com, @bittman on Twitter, and @markbittman on Instagram.

4. How to Cook Everything: Holiday Cooking