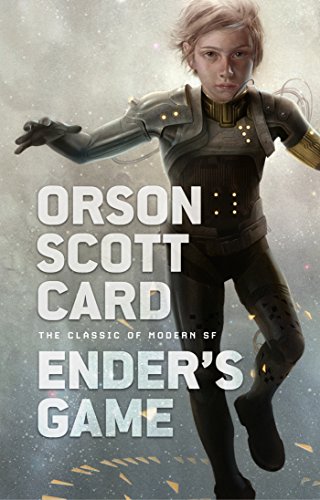 Once again, Earth is under attack. An alien species is poised for a final assault. The survival of humanity depends on a military genius who can defeat the aliens. But who?

Ender Wiggin. Brilliant. Ruthless. Cunning. A tactical and strategic master. And a child.

Recruited for military training by the world government, Ender's childhood ends the moment he enters his new home: Battle School. Among the elite recruits Ender proves himself to be a genius among geniuses. He excels in simulated war games. But is the pressure and loneliness taking its toll on Ender? Simulations are one thing. How will Ender perform in real combat conditions? After all, Battle School is just a game. Isn't it?

Children of the Fleet

The Second Formic War (with Aaron Johnston)
The Swarm /The Hive

A Reading Guide for Ender's Game.

Ender's Series: Ender Wiggin: The finest general the world could hope to find or breed.

The following Ender's Series titles are listed in order: Ender's Game, Ender In Exile, Speaker for the Dead, Xenocide, Children of the Mind.

A War of Gifts, First Meetings.

The Authorized Ender Companion: A complete and in-depth encyclopedia of all the persons, places, things, and events in Orson Scott Card’s Ender Universe.

'Cards has taken the venerable sf concepts of a superman and an interstellar war against aliens, and, with superb characterization, pacing and language, combined them into a seamless story of compelling power.