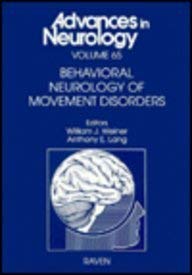 This volume is the first comprehensive clinical reference on the behavioral manifestations of movement disorders. The book examines the cognitive and behavioral alterations observed in patients with a wide variety of movement disorders, including Parkinson's disease, other akinetic rigid syndromes, Wilson's disease, Huntington's disease, and Tourette's syndrome. Coverage includes both current theories of why basal ganglia dysfunction produces behavioral disorders and practical guidelines for managing patients with these problems.
The opening chapters review the role of the basal ganglia in behavior and describe the behavioral effects of specific focal lesions in the basal ganglia. The contributors then discuss the wide range of behavioral disturbances seen in Parkinson's disease, including personality alterations, early and late cognitive changes, depression, and drug-induced behavioral states. Other chapters delineate the behavioral problems observed in other akinetic rigid syndromes and the psychiatric and behavioral abnormalities seen in Wilson's disease.
Close attention is given to the cognitive and behavioral changes that occur in Huntington's disease and to the psychological effects of presymptomatic testing in individuals at risk for Huntington's disease. A chapter on psychogenic movement disorders examines the associated psychopathology and details strategies for evaluation and treatment. Also included is an in-depth discussion of the psychiatric factors predisposing to the development of tardive dyskinesia in patients treated with neuroleptic drugs.
The section on Tourette's syndrome examines the full range of associated behavioral abnormalities, including attention deficit disorder, sensory phenomena, and obsessive-compulsive disorder. The contributors also address the controversy as to whether Tourette's syndrome is a broad behavioral spectrum disorder, or whether only certain behavioral abnormalities are true manifestations of the Tourette's genotype. The book concludes with a broad discussion of psychological problems in patients with dystonia.
This volume is an essential reference for all neurologists, psychiatrists, and psychologists. It also offers valuable guidance to primary care physicians who observe behavioral symptoms in patients with movement disorders.

Book Description Raven Pr, 1995. Hardcover. Condition: Good. Item may show signs of shelf wear. Pages may include limited notes and highlighting. May include supplemental or companion materials if applicable. Access codes may or may not work. Connecting readers since 1972. Customer service is our top priority. Seller Inventory # mon0001629571

Book Description Raven Pr, 1995. Condition: Good. A+ Customer service! Satisfaction Guaranteed! Book is in Used-Good condition. Pages and cover are clean and intact. Used items may not include supplementary materials such as CDs or access codes. May show signs of minor shelf wear and contain limited notes and highlighting. Seller Inventory # 0781701740-2-4