Items related to It's Not Easy Bein' Me: A Lifetime Of No Respect...

Rodney Dangerfield It's Not Easy Bein' Me: A Lifetime Of No Respect But Plenty Of Sex And Drugs

It's Not Easy Bein' Me: A Lifetime Of No Respect But Plenty Of Sex And Drugs 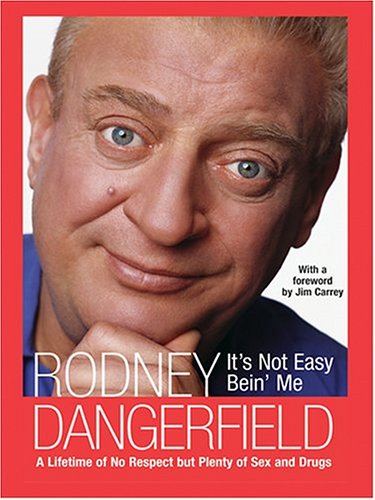 Anybody can repeat a Rodney Dangerfield joke, but nobody can tell one like the man himself. That's because his humor, built on the premise that "he don't get no respect," is drawn from a life so hard that the only way to survive was to laugh at it - though all the drugs and hookers certainly helped. Here Dangerfield comes clean about his brutal life and the unlikely triumph he made out of it.

From Publishers Weekly:
A Vegas headliner for 20-plus years, Dangerfield became a huge comedic success while maintaining his image as a hassled everyman. He is, says Carrey, "as funny as a carbon-based life form can be." After writing I Couldn't Stand My Wife's Cooking, So I Opened a Restaurant; I Don't Get No Respect; and No Respect, he now presents this anecdotal autobiography, effectively blending honesty and humor. He was born Jacob Cohen in 1921 to a vaudevillian father constantly on the road and a "coldhearted," "selfish" mother: "I guess that's why I went into show business—to get some love." As Jack Roy, he began performing in his teens, struggled in clubs across the country but quit in 1949 to spend 12 years as an aluminum-siding salesman. At 40, he changed his name and his act: "I was older and wiser, yeah, but I was funnier too." In a major comeback, he made 70 Tonight Show appearances and opened his own nightclub in 1969, followed by TV specials and commercials, albums and hit movies. Writing with hip, showbiz savvy and a backstage bawdiness, he regales with tales of Lenny Bruce, Andy Kaufman and many more, and devotes full chapters to sex and drugs. Sidebar jokes, relevant to the text, appear throughout, along with cartoons and b&w photos.
Copyright © Reed Business Information, a division of Reed Elsevier Inc. All rights reserved.
Review:
"Rodney has found a way to appeal to every generation."
-- Jim Carrey

It's Not Easy Bein' Me: A Lifetime of No Respect But Plenty of Sex and Drugs