Items related to A Critical History of Television's the Twilight... 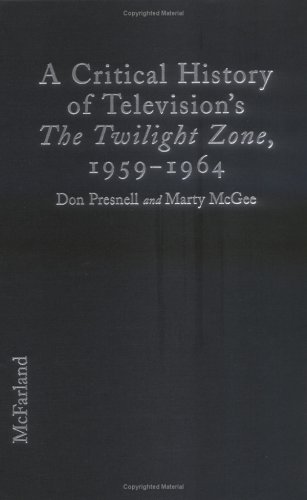 Rod Serling's anthology series The Twilight Zone is recognized as one of the greatest shows of all time. Ostensibly science fiction, the show was that and much more; always intelligent and thought-provoking, it used conventions and techniques of several genres-science fiction, fantasy, Westerns, horror, and film noir, among others-to explore such universal human issues as violence, fear, prejudice, love, death, and individual identity.

This comprehensive reference work first gives a complete history of the show, from its beginning in 1959 to its final 1964 season. The authors then provide critical commentaries and incisive analyses of all 156 episodes, along with the most complete listing of casts and credits ever published. Biographical profiles of writers and contributors comprise the book's third main section. Detailed appendices-writers, directors, actors, genres, and a listing of all episodes in order of original airdate-are also included. An extensive bibliography and an exhaustive index conclude the work.

"a solidly researched, thorough history of the series, from its idea to its demise after five seasons. ...an exceptionally well-documented chronicle" -- The Villadom Times

"all 156 original (59-64) episodes are here with credits, plot and comments. Appendices include writer and contributor bios and credits, actor TZ credits and a look at unfilmed stories" -- Psychotronic

"appendices provide biographies of the writers, with their credits, listings of directors and actors, information on unfilmed and 'lost' episodes, and a break down by genres and themes" -- Classic Images

"comprehensive...authors provide a commentary and an analysis of each of the 156 Twilight Zone episodes" -- The Intelligencer Record

"for serious film libraries...pairs a complete history of the show with critical comments and analyses...[a] fine reference" -- Reviewer's Bookwatch

"well-researched...provides a fascinating history of the series and a thorough guide to episodes. ...recommended to television history collections in college and public libraries. Fans of the series will certainly wish to purchase a copy" -- ARBA