Items related to Som See and the Magic Elephant

Som See and the Magic Elephant 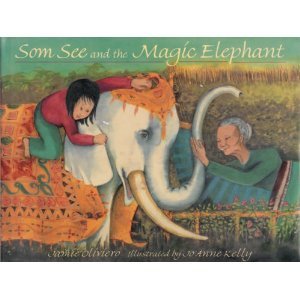 In an original tale expressive of the Southeast Asian culture of Thailand, a girl tries to retrieve a magic elephant from the rainforest and bring it to the deathbed of her great-aunt to fulfill her dying wish.

Kindergarten-Grade 3?In a remote village in Thailand, young Som See grants her great aunt's dying wish by finding and bringing her a rare white elephant from the depths of the rainforest. When Pa Nang dies the next morning, Som See is comforted, knowing the old woman touched the elephant's trunk and will have luck on her final journey. Described on the flap as an original folktale, the story is an uneasy mix of magical realism and realism. A detailed afterword describes the setting as well as the medium for the illustrations?cloth dyed according to traditional Thai techniques. While the artistic process will be of interest to craftsmen young and old, the pictures themselves are more decorative than expressive. Jungle flowers are prominently featured, without relevance to the text, while the human figures are wooden, their expressions and gestures approaching cliche. A sweet story about death in an exotic setting, but too sentimental to be truly comforting.?Margaret A. Chang, North Adams State College, MA
Copyright 1995 Reed Business Information, Inc.

Ages 6^-8. At the center of this story is Som See's warm relationship with her aged, much-revered Pa Nang (great-aunt). Pa Nang is worried about an upcoming journey, which adult readers will clearly recognize as her death, and wants to touch a white elephant for luck. Som See travels into the forest, where she discovers a magnificent elephant to make her great-aunt's wish come true. The early part of the story, set in the village, is realistic, with the border between daily life and the spirit world believably fluid. The latter part of the story is more fanciful and includes a talking fish god. Kelly used silk dyeing techniques developed in Java and Thailand for her pictures, which show a lush, glowing world, abundant with greenery and flowers. The artwork helps us believe the story because the place it evokes is so vivid. Mary Harris Veeder

1. Som See and the Magic Elephant