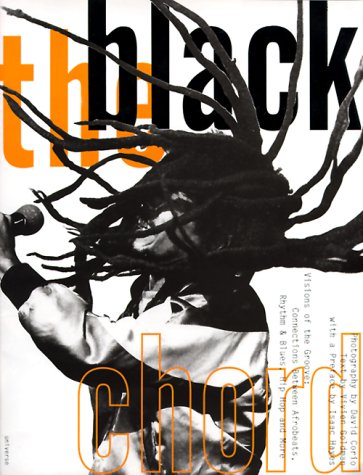 A celebration of Black music in original photography and text. The Black Chord bridges the boundaries between blues, rock, funk, jazz and world music. This lavishly illustrated book makes the historical, social, personal, and creative connections between great Black musicians from around the world. Tracing the history of today's music, it delves into the ancestral source that will continue to enrich the pop charts in the future.

Organized by themes such as Roots & Culture, Heart & Soul, Revolution, and Explorers. The
Black Chord celebrates the idea of a musical thread that travels throughout the world expressing a sensibility unique to each region. This thread weaves through every place, changing its culture and music. In this comprehensive and unprecedented survey compelling portraiture is combined with a fascinating history, including highlights from the author's interviews with such luminaries as Bob Marley, Missy Elliott, Cassandra Wilson, Curtis Mayfield, and more, to create an insightful, in-depth volume.

'The Black Chord a landmark depiction of the cultural cross-fertilization that is the foundation of today's pop. Following a circular path, music has traveled from its return and recreate itself: Senegalese rhythms survived slavery and flourished in New Orleans to become jazz and rhythm & blues which informed Jamaican reggae, which influenced New York hip-hop, which in turn-completing the circle-inspired young rap artists in Senegal. This is a centuries long saga that continues to energize musicians in every genre.

David Corio has been a photographer for more than twenty years. His work has appeared throughout the U.S. and England on more than one hundred record sleeves as well as in the New York Times, the Times in London, New Musical Express, the Face, Rolling Stone, Entertainment Weekly, Vibe, Mojo, the Source, and more.

Vivien Goldman is an author who has been chronicling Black music and culture for twenty-five years. Her journalism has appeared throughout the U.S., England, and France in publications such as Rolling Stone, the Village Voice, Harper's Bazaar, Marie Claire, British Elle, Billboard, and the Daily Telegraph in London.

Isaac Hayes is a legendary musician and radio personality. Hayes is also the voice of Chef on the popular animated series of "South Park."

From the introduction by Isaac Hayes: As you look through these pages, you'll see the faces of some musicians I know, love, and respect, and others whose work makes me feel like I know them. Some of these folks and their music may be strangers to you, but they're all worth meeting.

There are singers of love songs that demonstrate all the different ways we musicians have of showing our emotions. Life can be a struggle and socially committed artists in this book sing about it, or have even died for it. We're all surrounded by different boundaries that try to limit us, but experimental performers find a way to break through and share their reality with new kinds of music.

The original rhythms of the music we hear on the radio in American and Europe today came up from the Caribbean and Africa. Those are the roots. The grooves took on different vibrations in different locations, and you can still hear them now in hip-hop and R&B.

When I had the opportunity to go to Africa and visit the villages, I heard the real, raw, true rhythms and realized the origins of the music that I was raised on. It reminded me of who I was and where I came from and that I owe it to myself to pursue my history. We should all take lessons and understand the whole odyssey of music coming from Africa to where it is today, so that we can have a deeper appreciation of how music came to be where it is.

I first heard African drum rhythms and chants at the movies and they weren't too different from the old Negro spirituals I grew up with in the South. There was a relationship. Though I didn't know anything about Africa, it felt similar.

During slavery, Black people were only allowed to sing those spirituals and eventually the blues, which evolved into a cry of the people. You worshipped, celebrated religious faiths and beliefs, or you lamented the oppression, via spirituals or gospel. You sang for deliverance or the hereafter: the relief, the celebration of passing over from this life to another.

That spirit resonates a lot in popular music. It sounds more contemporary, but the message is always there.