Items related to Introducing the Apocrypha: Message, Context, and Significanc... 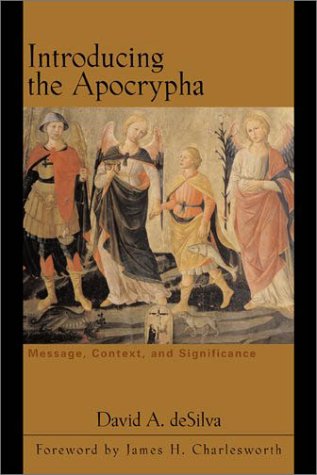 The status of the apocryphal (or deuterocanonical) books has been one of the longstanding areas of disagreement among various Christian traditions. David deSilva suggests, however, that whether one views these books as Scripture (Catholic and Eastern Orthodox Christians) or not (Protestant Christians), these books should be read and studied for their inherent value.

The books of the Apocrypha are a witness to faith, specifically the faith of Jewish people living from 200 B.C.E. to 100 C.E. Contemporary Christian readers find these books to be surprisingly relevant. In addition, they provide essential historical background for understanding the Judaism of Jesus¹ day and the Jewish matrix of early Christianity.

After explaining the value of studying the Apocrypha and surveying the historical context from which these writings emerged, deSilva proceeds through each book of the Apocrypha (as found in the NRSV). Using all the tools of a skilled interpreter, he provides the necessary background details (date, circumstances of writing, etc.) before surveying the content and message of each book. Along the way, readers are introduced to connections between the Apocrypha and the Old and New Testaments and are encouraged to embark upon their own exploration of these fascinating books.

Especially suitable for classroom settings, this substantive, up-to-date, and well-written volume is accessible to and will be enjoyed by clergy and laity as well.

This comprehensive introduction to the Old Testament apocryphal books has become a standard authority on the topic. The new edition has been substantially revised and updated throughout to reflect the latest scholarship.

"David deSilva's Introducing the Apocrypha remains the best book in the field. These important writings are placed in full context--historically, religiously, and literarily. Again and again deSilva shows how the books of the Apocrypha clarify important themes and traditions in the teaching of Jesus and in the literature of the early church. The revised edition is rich with insight and will serve well a new generation of students and scholars."
--Craig A. Evans, Houston Baptist University

"DeSilva offers a readable and competent introduction to these complex and neglected writings. This is the best one-volume introduction to the apocryphal, or deuterocanonical, books currently available in English."
--Jeremy Corley, St. Patrick's College, Maynooth, Ireland

"For most Christians today the Apocrypha remain a marginal curiosity or object of suspicion. Informed by burgeoning scholarship in the study of early Judaism, the second edition of deSilva's engaging volume, Introducing the Apocrypha, reveals these books as vibrant witnesses to streams of thought, tradition, and faith that formed a theological and cultural matrix for the earliest church. Throughout, deSilva's fine introduction balances nuance and precision with clarity and accessibility."
--Anathea Portier Young, Duke Divinity School

"An excellent introduction to the Apocrypha that is fully informed by contemporary scholarship and written in a style that is readable and accessible to laity and beginning students. Introduction to the Apocrypha also provides a substantial discussion of the content of these books and a better indication of their literary character than one usually finds in an introductory textbook. It can be recommended without reservation for students at all levels."
--John J. Collins, Yale University Divinity School

"Jews and Christians who wish to learn about their ancient roots need to know about--indeed read--the so-called apocryphal books. . . . Introducing the Apocrypha is the best introduction to this ancient corpus."
--James H. Charlesworth, Princeton Theological Seminary (from the foreword)

David A. deSilva (Ph.D., Emory University) is Trustees' Distinguished Professor of New Testament and Greek at Ashland Theological Seminary in Ohio and an ordained elder in the Florida Conference of the United Methodist Church.  He is the author of over twenty books, including The Jewish Teachers of Jesus, James, and Jude: What Earliest Christianity Learned from the Apocrypha (2012), Seeing Things John's Way: The Rhetoric of the Book of Revelation (2009), An Introduction to the New Testament: Contexts, Methods & Ministry Formation (2004), and Honor, Patronage, Kinship & Purity: Unlocking New Testament Culture (2000), as well as a hundred journal articles and contributions to reference works and collections of essays.