Constant Minds: Political Virtue and the Lipsian Paradigm in England, 1584-1650 (Mental and Cultural World of Tudor and Stuart England) 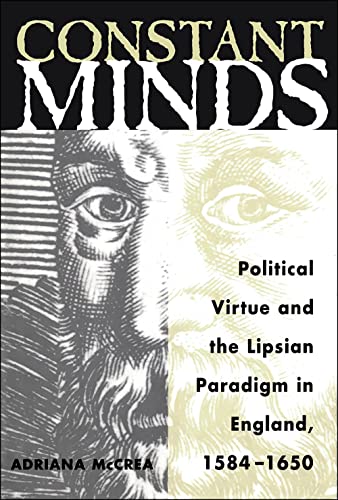 In response to the crisis provoked by the Wars of Religion in Europe in the sixteenth century, the Flemish philosopher Lipsius developed a synthesis of stoic morality and Tacitean political analysis called 'the Lipsian paradigm,' or neostoicism. The paradigm espoused the adaptation to prevailing political circumstances, the practice of 'mixed prudence,' (knowing the circumstances in which to apply deceit) and the use of historical example as a guide to contemporary action as political virtues.

Constant Minds investigates the reception and use of Lipsian ideas in the moral, political, and literary culture of late-sixteenth- and early-seventeenth-century England through examination of the writings and activities of Walter Ralegh, Francis Bacon, Fulke Greville, Ben Jonson, and Joseph Hall. Adriana McCrea demonstrates how this continental school of thought permeated the political ideas of these English writers, and places her study in the contexts of the literary conventions of the humanist tradition, the political events of the time, and the activities and circles of the authors themselves. McCrea's study fuses intellectual history with political history and literary analysis, prompting new questions about the nature of English Renaissance humanism and political perception in England during the early modern period.

Adriana McCrea has taught at Dalhousie University, Acadia, and the University of King's College in Nova Scotia.

1. Constant Minds: Political Virtue and the Lipsan Paradigm in England 1584-1650