Items related to Discourses of Tolerance & Intolerance in the European... 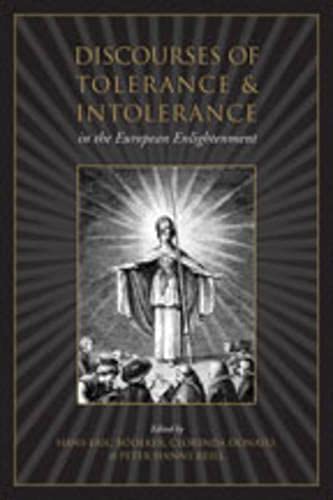 The principle of tolerance is one of the most enduring legacies of the Enlightenment. However, scholarly works on the topic to date have been primarily limited to traditional studies based on a historical, 'progressive' view or to the critiques of contemporary writers such as Adorno, Horkheimer, Foucault, and MacIntyre, who believed that the core beliefs of the Enlightenment, including tolerance, could actually be used as vehicles of repression and control rather than as agents promoting individual and group freedom.This collection of original essays by a distinguished international group of contributors looks at the subject in a new light and from a number of angles, focusing on the concept of tolerance at the point where the individual, or group, converges or clashes with the state.

The volume opens with introductory essays that provide essential background to the major shift in thinking in regard to tolerance that occurred during the eighteenth century, while considering the general problem of writing a history of tolerance. The remaining essays, organized around two central themes, trace the expansion of the discourses of tolerance and intolerance. The first group treats tolerance and intolerance in relation to the spheres of religious and political thought and practice. The second examines the extension of broad issues of tolerance and intolerance in the realms of race, gender, deviancy, and criminality. While offering an in-depth consideration of these complex issues in the context of the Enlightenment, the volume sheds light on many similar challenges facing contemporary society.

Hans-Erich Bödeker is a senior research fellow at the Max Planck Institute for the History of Science, Berlin.

Clorinda Donato is the George L. Graziadio Chair of Italian Studies and professor of French and Italian at California State University, Long Beach.
Peter H. Reill is a professor in the Department of History at the University of California, Los Angeles.