Items related to Helping Verbs of the Heart: A Novel

Esterhazy, Peter Helping Verbs of the Heart: A Novel

Helping Verbs of the Heart: A Novel 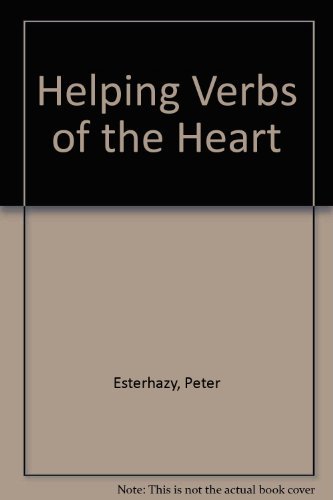 Two brothers and a sister, summoned by their father and reunited at the hospital where their mother lies on her deathbed, must come to grips with their relationships with both their parents

The main narrative thread of this self-consciously avant-garde novella is a fairly straightforward account of the death of the narrator's mother. A subtext consists of emotional observations about the event, which take the form of random jottings. Mother is incarcerated in a nightmarishly described hospital, ministered to by nurses whose sexuality is barely confined by their tight uniforms and attended by a doctor whose treatment comes just shy of mercy killing. After the tasteful funeral, in which the surviving family is consoled by a bewildering array of relatives, the narrator is visited by his mother's ghost, who vehemently asserts that he is the one who has died. "Mother" 's hallucinatory descriptions of her life as a young girl and woman are juxtaposed with a painfully real flashback of hospital life. Known for his controversial subject matter, Esterhazy is one of Hungary's best-known writers; this is the first of his books to be published in English.
Copyright 1990 Reed Business Information, Inc.

1. Helping Verbs of the Heart: A Novel

2. Helping Verbs of the Heart: A Novel Esterhazy, Peter