Items related to One Dimensional Man: Studies in the Ideology of Advanced...

Marcuse, Herbert One Dimensional Man: Studies in the Ideology of Advanced Industrial Society

One Dimensional Man: Studies in the Ideology of Advanced Industrial Society 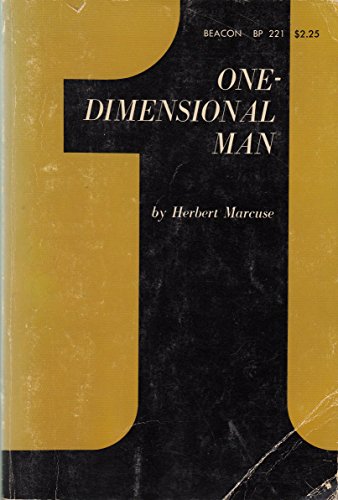 The work offers a wide-ranging critique of both contemporary capitalism and the Communist society of the Soviet Union, documenting the parallel rise of new forms of social repression in both these societies, as well as the decline of revolutionary potential in the West. Marcuse argues that "advanced industrial society" created false needs, which integrated individuals into the existing system of production and consumption via mass media, advertising, industrial management, and contemporary modes of thought.

Herbert Marcuse (1898-1979) was born in Berlin and educated at the universities of Berlin and Freiburg. He fled Germany in 1933 and arrived in the United States in 1934. Marcuse taught at Columbia, Harvard, Brandeis, and the University of California, San Diego, where he met Andrew Feenberg and William Leiss as graduate students. He is the author of numerous books, including One-Dimensional Man and Eros and Civilization.

Marcuse shows himself to be one of the most radical and forceful thinkers of this time. --The Nation

ONE DIMENSIONAL MAN: STUDIES IN