Items related to Translated Woman: Crossing the Border with Esperanza's... 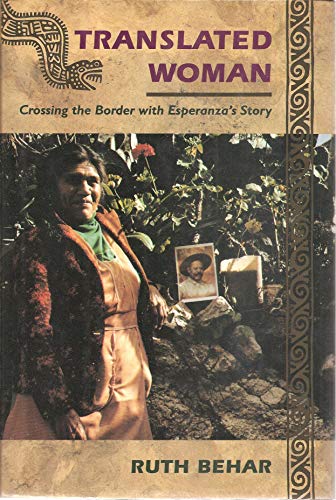 A look at the life of one Mexican woman describes her father's brutal treatment of her mother and her mother's subsequent miscarriages, her own suffering, and her sexual and financial freedom, her relationship with her daughters, and her spiritual redemption.

When Cuban American anthropologist Ruth Behar tried to piece together the lives led by women in one Mexican village, she didn't reckon on the stubborn magnetism of Esperanza, who "seemed determined to push her story into my hands and stuff it into my ears, so I could take it back across the border." Translated Woman is a giddy rush of dramatic words from Esperanza herself talking late into the night about the hardships and triumphs of her life. Having barely fled the wrath of her drunken father, she takes up with a philandering wife-beater who keeps her in the Mexican version of purdah, complete with a scolding mother-in-law. Looming starvation and the loss of child after child, which she ascribes to the coraje (rage) her worthless husband riles up in her breast, impels her to leave him. Gradually she carves out enough work as a street peddler to support herself and her children. Great turns of phrase from Behar and Esperanza enliven this unusual account. Skirting volatile feuds between neighbors, Behar worries lest her research get mired in "a nest of old hatreds." Says Esperanza of being penniless, "I almost had to use one hand to cover my front and another hand to cover my back."

Ruth Behar-ethnographer, essayist, poet, and filmmaker-is professor of anthropology at the University of Michigan. The recipient of a MacArthur Fellows Award and a John Simon Guggenheim Fellowship, Behar is the author of several books, including The Vulnerable Observer. She lives in Ann Arbor, Michigan.