Items related to Falling Up: How a Redneck Helped Invent Political Consulting... 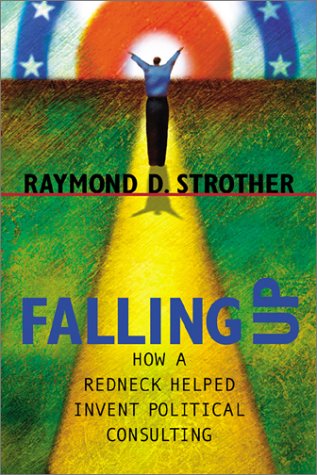 The political consultant describes his life and career, first in Louisiana politics and then advising such presidential candidates as Gary Hart and Bill Clinton.

Raymond D. Strother is president of the firm Strother, Duffy Strother and lives in Washington, D.C., and Montana. He is former president of the American Association of Political Consultants, a former fellow at the John F. Kennedy Institute of Politics at Harvard University, a member of the Louisiana State University Journalism Hall of Fame, the recipient of a 2001 Pollie Award for the Best Political Television, and the author of the political novel Cottonwood.

Strother was one of the first modern political consultants: he started driving Louisiana candidates and eventually specialized in precisely crafted radio and TV ads. His memoir is filled with wild and woolly stories in which bordello-owning sheriffs and country music bands are a regular fixture on the campaign trail. It also delves into the highly successful period in the early 1980s when a run of victorious Democratic senatorial campaigns culminated in Strother joining Gary Hart's frenetic, and doomed, 1984 presidential run. (There's also a suggestion that he might have prevented the Donna Rice incident.) He gave James Carville one of his first political jobs and crossed paths several times with Dick Morris, whose significance as a consultant he admits despite his conviction that the man represents "everything that has gone wrong with American politics." Bill Clinton also comes under fire; Strother accuses him of "adding my body to those he climbed over to reach the White House" by using his services for several Arkansas campaigns, then dumping him for flashier competitors. The accusation is typical of the book's unblinkered view; after publishing a thinly disguised roman ... clef, Cottonwood, in the 1990s, Strother holds nothing back this time. He gives full vent to his anger over prejudice against his Southern background, his disgust with the corruption of Louisiana politics and his "Darwinist, ferocious" approach to his profession. Although Strother's political prestige would be enough to guarantee his memoir's importance, his unflinching recollections raise the book to a even higher level of significance.
Copyright 2003 Reed Business Information, Inc.