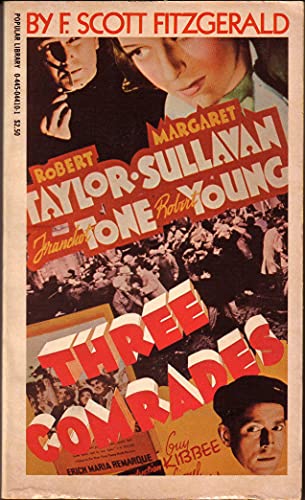 Much of the magic surrounding his legendary name had vanished by the time F. Scott Fitzgerald—forty-one years old, deeply in debt, full of re­morse that “I had been only a mediocre caretaker of most things left in my hands, even of my talent”—mounted a third assault on the money of Hol­lywood and, by writing this adaptation of Remarque’s Three Comrades, proved that the writer, if not the man, had sur­vived the famed “crack-up.”

The screenplay for Three Comrades, starring Robert Young, Margaret Sulla­van, Franchot Tone, and Robert Taylor, ultimately was the result of the collaboration of E. E. Paramore and producer Joseph Mankiewicz, though Fitzgerald fought to salvage as much of his original script as possible. By his own reckoning, only about a third of the final script was his, and “all shad­ows and rhythm removed.”

The script published here is the one Fitzgerald tried desperately to save. Neither Mankiewicz nor Paramore has written a line. This script is, of course, valuable to those who would know the complete Fitzgerald. It also proves fas­cinating as a study of adaptation, show­ing which scenes Fitzgerald chose to dramatize to catch the essence of the Remarque story as well as showing how he made visual what the novelist could place in the heads of his readers.

Series editor Matthew J. Bruccoli provides the background in an il­luminating Afterword and in an appen­dix containing eight scenes that re­sulted from the collaboration of Man­kiewicz, Paramore, and Fitzgerald.