Items related to The Right to Protest: The Basic ACLU Guide to Free...

The Right to Protest: The Basic ACLU Guide to Free Expression (ACLU Handbook) 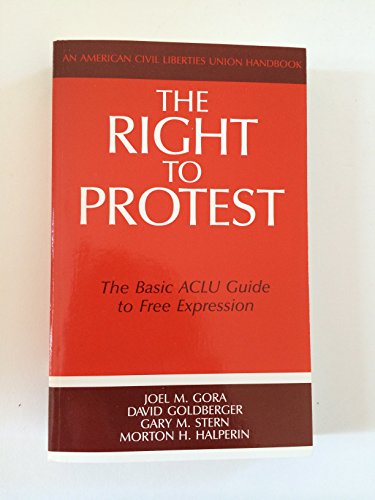 Americans have a great many legal rights that government must respect and courts will enforce. This altogether new volume sets forth the rights of those people who become involved in the vital issues of our time and seek to effect—or perhaps resist—political change by having an impact on matters of politics, government, and public concern.

Our system has fashioned a number of critical rights and opportunities for political activists and protestors. Of central importance are the freedoms of speech, press, assembly, petition, and religion safeguarded by the First Amendment to the United States Constitution. This book describes those constitutional rights to free speech and explains how they sharply limit the ability of government to suppress protest and dissent. Government surveillance of political activists and the remedies that can be used to prevent such surveillance are also discussed, as in the right of citizens to learn about the affairs of government as protected by the Freedom of Information laws.

Finally, it is not only government that interferes with the right to protest; private organizations or corporations may interfere as well, and the protections provided in those situations by state or local law are spelled out.

2. The Right to Protest: The Basic ACLU Guide to Free Expression (ACLU Handbook)

3. The Right to Protest: The Basic ACLU Guide to Free Expression (ACLU Handbook)