Items related to Frida Kahlo: Painting Her Own Reality (Discoveries... 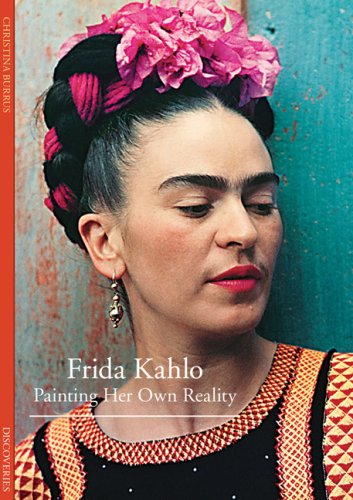 "My painting carries within it the message of pain". Frida Kahlo—born in 1907 near Mexico City—learned about pain at a very early age. She contracted polio at six, and then at eighteen suffered serious and permanent injury to her right leg and pelvis in a terrible bus accident. Young and undaunted, she went on to fall in love with the great mural painter Diego Rivera at a time when their native Mexico was going through a period of thrilling political and cultural upheaval. Rivera and Kahlo were a legendary couple—both were impassioned, lifelong communists while fervently attached to traditional Mexican Indian culture, and both were driven by a relentless artistic ambition that surmounted all the dramas that plagued their marriage.Later, Frida became the friend and lover of Leon Trotsky. She was greatly admired by the Surrealists and sat for some of the greatest photographers of her day. Her art largely consisted of self-portraits, like the famous pain

Born in Munich, Germany, Christina Burrus began her studies in medicine but transferred and graduated in Art History with a concentration in German and Austrian Baroque painting. She worked as an art restorer and now curates many exhibitions, for which she also edits catalogs, in locations such as France, Switzerland, Mexico, and Denmark.

Frida Kahlo: Painting Her Own Reality

Frida Kahlo: Painting Her Own Reality