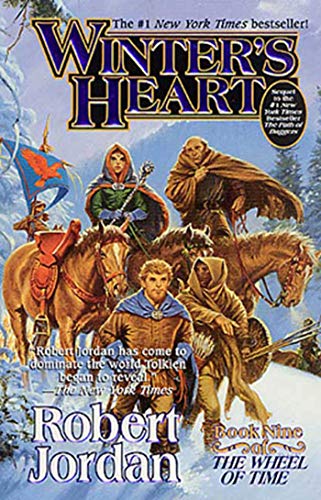 Rand is on the run with Min, and in Cairhein, Cadsuane is trying to figure out where he is headed. Rand's destination is, in fact, one she has never considered.

Mazrim Taim, leader of the Black Tower, is revealed to be a liar. But what is he up to?

Faile, with the Aiel Maidens, Bain and Chiad, and her companions, Queen Alliandre and Morgase, is prisoner of Savanna's sept.

Perrin is desperately searching for Faile. With Elyas Machera, Berelain, the Prophet and a very mixed "army" of disparate forces, he is moving through country rife with bandits and roving Seanchan. The Forsaken are ever more present, and united, and the man called Slayer stalks Tel'aran'rhiod and the wolfdream.

In Ebou Dar, the Seanchan princess known as Daughter of the Nine Moons arrives--and Mat, who had been recuperating in the Tarasin Palace, is introduced to her. Will the marriage that has been foretold come about?

Review:
Is Robert Jordan still doing the Light's work? Even loyal fans have to wonder. (And if you're not a fan yet, you'll have to read the previous 6,789 pages in this bestselling series to understand what all the fuss is about.)

Everyone's in agreement on the Wheel of Time's first four or five volumes: They're topnotch, where-have-you-been-all-my-life epic fantasy, the best in anybody's memory at the time since The Lord of the Rings. But a funny thing happened on the way to Tarmon Gai'don, and many of those raves have become rants or (worse) yawns. Jordan long ago proved himself a master at world-building, with fascinating characters, a positively delicious backstory, and enough plot and politics to choke a Trolloc, but that same strength has become a liability. How do you criticize what he's doing now? You want more momentum and direction in the central plot line, but it's the secondary stories that have made the world so rich. And as in the last couple of books, (A Crown of Swords and The Path of Daggers), Jordan doesn't really succeed at pursuing either adequately, leaving a lot of heavily invested readers frustrated.

Winter's Heart at least shows some improvement, but it's still not The Eye of the World. Elayne's still waiting to take the crown of Andor; the noticeably absent Egwene is still waiting to go after the White Tower; Perrin gets ready to pursue the Shaido but then disappears for the rest of the book. About the only excitement comes with the long-awaited return of Mat Cauthon and a thankfully rock 'em, sock 'em finale in which Rand finally, finally changes the balance of power in his fight against the Dark One. --Paul Hughes

From the Publisher:
20 cds