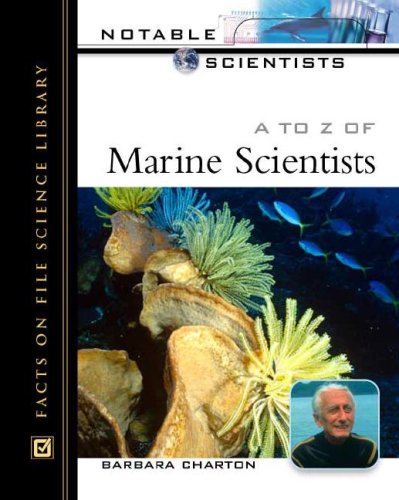 Provides biographical profiles of marine scientists who have made significant contributions to marine science, including George Bass, Marie Tharp, and Michael Sars.

Barbara Charton is associate professor and Head of the Science Reference Department at St. John's University Library in Jamaica, NY.Ms. Charton was Head of the Health Professions Library at Hunter College. She is the author of the Revised Edition of The Facts On File Dictionary of Marine Science.

Two inviting volumes "designed for high school students, researchers, teachers, and general readers." As is typical for the Notable Scientists series, these titles are clearly written and well organized and aim to include male and female contributors in their fields. The authors have included 115 (Weather and Climate ) and 145 (Marine Scientists ) scientists from varied educational and economic backgrounds, many countries, and different time periods.

Arrangement is alphabetical by last name, with most entries one or two pages long. Introducing each essay is basic biographical information (birth and death dates, nationality, field, education, and positions held). Emphasis is on how the person's work contributed to scientific understanding. Interestingly, although both titles encompass fields like mathematics, meteorology, and oceanography, there are only a few entries repeated in both books--Vilhelm Friman Koren Bjerknes (his name is spelled differently in each), Benjamin Franklin, Harald Ulrik Sverdrup, and Alfred Lothar Wegener. Librarians will be intrigued to read about Kurt Vonnegut's brother Bernard, who held 28 patents and developed cloud seeding.

Both volumes are well indexed. In addition to general indexes, there are lists of scientists by scientific field, country of birth, country of major scientific activity, and year of birth. Both titles define unfamiliar terms in context, but Weather and Climate also includes a glossary of lengthy, very well explained definitions. The bibliography in Marine Scientists has two pages of fairly current books and a few Web sites. The Weather and Climate bibliography offers eight pages of print and online sources, including much older journal articles. A list of climate-related Web sites is also included.

These volumes are definitely worth the price for high-school and public libraries. They may be useful for reports in middle-school collections too. RBB
Copyright © American Library Association. All rights reserved

Book Description Facts on File. Hardcover. Condition: New. 0816047677 BRAND NEW A portion of your purchase of this book will be donated to non-profit organizations. Over 1,000,000 satisfied customers since 1997! We ship daily M-F. Choose expedited shipping (if available) for much faster delivery. Delivery confirmation on all US orders. Seller Inventory # Z0816047677ZN

2. A To Z 0f Marine Scientists

4. A To Z of Marine Scientists

5. Notable Scientists - A To Z Of: Barbara Charton

Book Description PAPERBACK. Condition: New. Book Cover and ISBN may be different from US edition but contents as same US Edition. Excellent Quality,Quick delivery by USPS/UPS/FEDEX/DHL/ARAMEX, We may ship the books from Asian regions for inventory purpose. Our courier service is not available at PO BOX. Seller Inventory # aabe_9780816047673

Book Description PAPERBACK. Condition: New. Book Cover and ISBN may be different from US edition but contents as same US Edition. Excellent Quality,Quick delivery by USPS/UPS/FEDEX/DHL/ARAMEX, We may ship the books from Asian regions for inventory purpose. Our courier service is not available at PO BOX. Seller Inventory # abe_jan_9780816047673

8. A to Z of Marine Scientists

9. A to Z of Marine Scientists