Items related to Einstein from 'B' to 'Z'

Stachel, John Einstein from 'B' to 'Z' 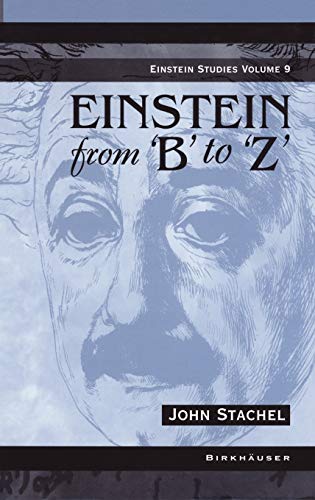 John Stachel, the author of this collection of 37 published and unpublished articles on Albert Einstein, has written about Einstein and his work for over 40 years. Trained as a theoretical physicist specializing in the theory of relativity, he was chosen as the founding editor of The Collected papers of Albert Einstein 25 years ago, and is currently Director of the Boston University Center for Einstein Studies.

Based on a detailed study of documentary evidence, much of which was newly discovered in the course of his work, Stachel debunks many of the old (and some new) myths about Einstein and offers novel insight into his life and work. Throughout the volume, a new, more human picture of Einstein is offered to replace the plaster saint of popular legend. In particular, a youthful Einstein emerges from the obscurity that previously shrouded his early years, and much new light is shed on the origins of the special and general theories of relativity. Also discussed in some detail are Einstein's troubled relationship with his first wife, his friendships with other physicists such as Eddington, Bose, and Pauli, and his Jewish identity.

The essays are grouped thematically into the following areas:

* Einstein and Other Scientists

Because the essays are independent of one another, readers will be able to dip into this collection to satisfy varying interests. It will be of particular interest to historians of 20th century science, working physicists, and students, as well as to the many members of the general reading public who continue to be fascinated by aspects of Einstein's life and work.

"This book is really a collection of essays on Einstein's life and, as the title suggests, does not try to offer a complete picture of the great man. The essays are independent so you can read them in any order and, indeed, I found it easier to read them by looking at the essay titles and choosing the one that caught my eye. ...It is clear that this is a very well researched book by a man who has written about Einstein and his work for over forty years and is the current Director of the Boston University Centre for Einstein Studies. The book does manage to paint a human picture of Einstein rather than try to build on the popular legend and there is no doubt that it will be used by historians as well as mathematicians and natural scientists as one of the most reliable studies of the man. It is the sort of book that one would expect to find in the library of all schools and universities."

"This welcome addition to the Einstein Studies book series presents a collection of selected articles and talks on Albert Einstein prepared over the past 25 years by John Stachel, the founding editor of the Collected Works of Albert Einstein. ...The articles selected survey the subject from different angles without going into too much technical detail, which makes them accessible to a wide audience of readers. ...The present volume can be recommended as a brief introduction into the life and work of Einstein. Thanks to sensibly provided annotations and references, it may also serve well as a departure point for deeper studies."