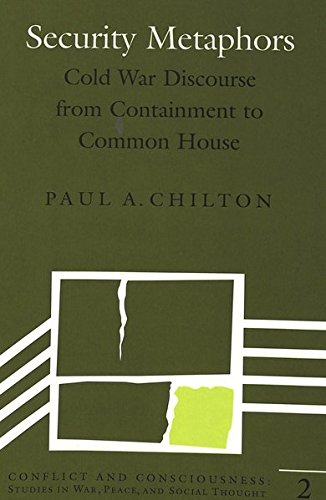 Understanding the nature of the 'cold war' that followed World War II is now more than ever a focus of debate. Security Metaphors starts from the premise that political and international realities are created, sustained and unraveled in discourse. The book begins by examining the conceptual underpinnings of international relations theory, and by careful linguistic analysis shows how metaphorical discourse contributed to the beginning and ending of the dangerous competition between 'East' and 'West'. It concludes not by attributing power to language, but to the hegemonic power that can best wield it.

Paul Chilton teaches at Warwick University and publishes in the field of language and discourse. His previous publications include Language and the Nuclear Arms Debate (1985), Orwellian Language and the Media (1988), and numerous articles on political discourse.

Paul Chilton's sophisticated, documentary study of the origins and ending of the Cold War in Europe will help redefine many scholars' understanding of the relation between international theory and political-diplomatic practice. Without belittling either politics or history, its use of metaphorical and discourse analysis critically illuminates the humanistic foundations of 'scientific' Realist and Communitarian perspectives, and helps us assess their changing relevance for explaining European developments. This book doesn't just promise new insights from linguistically oriented international relations research―it delivers!
Hayward R. Alker, Jr., John A. McCone Professor of International Relations at University of Southern California, and Emeritus Professor of Political Science at Massachusetts Institute of Technology)

Book Description Peter Lang Publishing 1996-04-01, 1996. Hardcover. Condition: Good. Item is in good condition. Some moderate creases and wear. This item may not come with CDs or additional parts including access codes for textbooks. Might be an ex-library copy and contain writing/highlighting. Seller Inventory # DS-0820421782-3