Items related to Rock and Roll Always Forgets: A Quarter Century of... 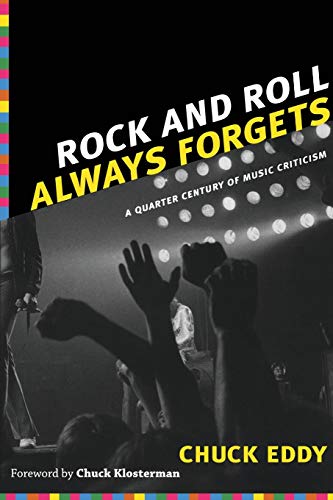 Chuck Eddy is one of the most entertaining, idiosyncratic, influential, and prolific music critics of the past three decades. His byline has appeared everywhere from the Village Voice and Rolling Stone to Creem, Spin, and Vibe. Eddy is a consistently incisive journalist, unafraid to explore and defend genres that other critics look down on or ignore. His interviews with subjects ranging from the Beastie Boys, the Pet Shop Boys, Robert Plant, and Teena Marie to the Flaming Lips, AC/DC, and Eminem’s grandmother are unforgettable. His review of a 1985 Aerosmith album reportedly inspired the producer Rick Rubin to pair the rockers with Run DMC. In the eighties, Eddy was one of the first critics to widely cover indie rock, and he has since brought his signature hyper-caffeinated, hyper-hyphenated style to bear on heavy metal, hip-hop, country—you name it. Rock and Roll Always Forgets features the best, most provocative reviews, interviews, columns, and essays written by this singular critic. Essential reading for music scholars and fans, it may well be the definitive time-capsule comment on pop music at the turn of the twenty-first century.

Chuck Eddy is an independent music journalist living in Austin, Texas. Formerly the music editor at the Village Voice and a senior editor at Billboard, he is the author of The Accidental Evolution of Rock ’n’ Roll: A Misguided Tour through Popular Music and Stairway to Hell: The 500 Best Heavy Metal Albums in the Universe. Chuck Klosterman is a freelance journalist and the author of numerous books, including Sex, Drugs, and Cocoa Puffs: A Low Culture Manifesto and Fargo Rock City: A Heavy Metal Odyssey in Rural North Dakota.

“This wide-ranging collection of essays (from the Voice, Rolling Stone, Spin, etc.) captures Eddy’s cantankerous, spirited, enthusiastic, and forceful takes on music from rap to country and musicians from Michael Jackson to Brad Paisley. . . . Eddy’s far-reaching insights into rock music push the boundaries of the rock criticism, showing why he remains one of our most important music critics.” - Publishers Weekly

“Eddy’s eccentricity is not only refreshing and entertaining; it’s also valuable. . . . [S]omething compels Eddy to pay attention to music that no other music journalist can be bothered with. This is a vital counterbalance to the critical herd-mind, and a reminder of how much music making and music fandom exists outside the media radar, and never makes it into the official narrative.” - Simon Reynolds, Bookforum

“[T]his new compendium of pieces by Eddy . . . reads like an alternate history of pop's last 25 (or so) years, in which album-oriented rock is saved from itself by the Ramones' Too Tough To Die, latter-day Def Leppard isn't rendered irrelevant by Nirvana, and horn-rimmed consensus about indie darlings Animal Collective is just a bad dream.” - Greg Beets, Austin Chronicle

“You can predict what Eddy will think of something, and you’ll often be wrong, but what he actually thinks will always make more sense, will fit Eddy’s written persona better, than what you had in mind. Eddy’s taste has a deep coherence that’s close to unique among rock critics. . . . [F]or an Eddy fan, it’s a kick getting to read about his favorite music in-depth in these pages, especially when he’s in its first flush of Chuck-love. Will to Power, the Lordz of Brooklyn, Banda Bahia, and White Wizzard are all here, because who else was going to write about them?” - Josh Langhoff, Los Angeles Review of Books

“Eddy's unflinching ability to connect the dots between what he's hearing and what he's living makes Rock and Roll an electric read. It should trip wires in the minds of not just aspiring and current critics but also casual listeners who might not realize how much is below the surface of what they're hearing.” - Michael Hoinski, Village Voice

“Other anthologies of music writing leave you wanting to race to hear the music being written about. Rock and Roll Always Forgets leaves me wanting to read more Chuck Eddy. And more, and more...” - Ken Tucker, Entertainment Weekly

“I don’t always agree with Chuck Eddy. In fact, I only occasionally agree with Chuck Eddy. But I’m always sure he cares, which I can tell not just because I know him, but because I love reading him. For more than twenty-five years he has been an original and indefatigable voice whose openness to new and unheralded music is legendary.”—Robert Christgau, Dean of American Rock Critics

“When Chuck hears a pop song, it’s like he is the first person who has ever heard it; he’s certainly aware of what the rest of the world already wants to believe, but those pre-existing perceptions are never convincing to him. . . . More than any other critic, Chuck Eddy showed how the experience of listening to music was both intellectually limitless and acutely personal. There was no ‘correct’ way to hear a song, and there were no fixed parameters on how that song could be described in print, and if that song made you reconsider abortion or the Oakland Raiders or your father’s suicide, then that intellectual relationship mattered because your engagement was real.”—Chuck Klosterman, from the foreword

“Few longtime pop music critics have been as fearlessly unhip in both their likes and dislikes, have been so willing to accept oft-ignored music on its own terms and have been as rock 'n' roll as Chuck Eddy, writer, former Village Voice music editor, self-described curmudgeon, ex-Army captain and hair-metal expert.” (Randall Roberts Los Angeles Times)

“This smart, very funny anthology includes some of the best work by any writer on country, metal, teen pop, Eighties hip-hop and Eminem. It’s the only book you’ll ever read that compares Jay-Z’s The Blueprint to Huey Lewis’ Sports—and means it as a compliment.” (Jody Rosen Rolling Stone)