Fighting Back: Lithuanian Jewry's Armed Resistance to the Nazis, 1941-1945 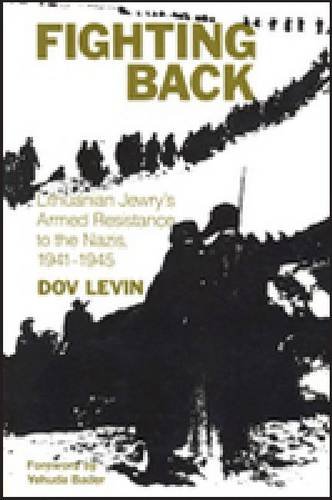 Fighting Back chronicles the activities of those Jews who joined the Soviet Army and of those who during World War II fought the Nazis in the forests, in the ghettos of Vilna, Kovno, Shavli, and Svencian, and in the concentration camps. This landmark study, the first comprehensive account of organized resistance against the Nazis by Lithuanian Jews, now with a new preface that includes findings from the archives of independent Lithuania, is the product of decades of research. A former member of the Kovno ghetto underground and later a fighter with the Lithuanian partisans, Levin brings personal experience as well as sophisticated scholarship to this richly detailed account of battles fought on a little-known front. The author draws on a wide range of original sources-memoirs, trial transcripts, military documents, ghetto and battlefield diaries, and contemporary Jewish accounts published outside Lithuania-to show how Lithuanian Jewry's strong sense of cultural unity shaped its desperate anti-Nazi struggle. His interviews with 165 surivors and on the history, motives, organization, and methods of clandestine resistance units. Fighting Back represents an important chapter in the literature on the Holocaust, a much-needed contribution to modern studies of Jewish resistance during the war.

This landmark book, updated with a new preface to include findings from the archives of independent Lithuania, presents the first comprehensive account of organized resistance against the Nazis by Lithuanian Jews. Dov Levin, an eminent Israeli scholar who was once a member of the Kovno ghetto underground and later a fighter with the Lithuanian partisans, describes the declining social and economic position of Lithuanian Jews in the years leading up to World War II and their plight first under Soviet, and later under German occupation. He chronicles the activities of Jews who left their homeland to join the Soviet Army, those who remained behind to fight in the forests and in the ghettos of Vilna, Kovno, Shavli, and Svencian, and those who fought in the concentration camps. FIGHTING BACK is the product of decades of research, involving the study of memoirs, trial transcripts, military documents, ghetto and battlefield diaries, interviews, and contemporary Jewish accounts published outside Lithuania.

Book Description Holmes & Meier Pub, 1985. Condition: Good. Former Library book. Shows some signs of wear, and may have some markings on the inside. Seller Inventory # GRP82103766

Book Description Holmes & Meier Pub, 1985. Paperback. Condition: VERY GOOD. Pages are intact and are not marred by notes or highlighting, but may contain a neat previous owner name. The spine remains undamaged. Supplemental materials are not guaranteed with any used book purchases. Seller Inventory # 0841913897_abe_vg

Book Description Holmes & Meier Pub, 1985. Condition: Good. A+ Customer service! Satisfaction Guaranteed! Book is in Used-Good condition. Pages and cover are clean and intact. Used items may not include supplementary materials such as CDs or access codes. May show signs of minor shelf wear and contain limited notes and highlighting. Seller Inventory # 0841913897-2-4